The SDF warns of the impact of Turkish military operations in the fight against the Islamic State in Syria. 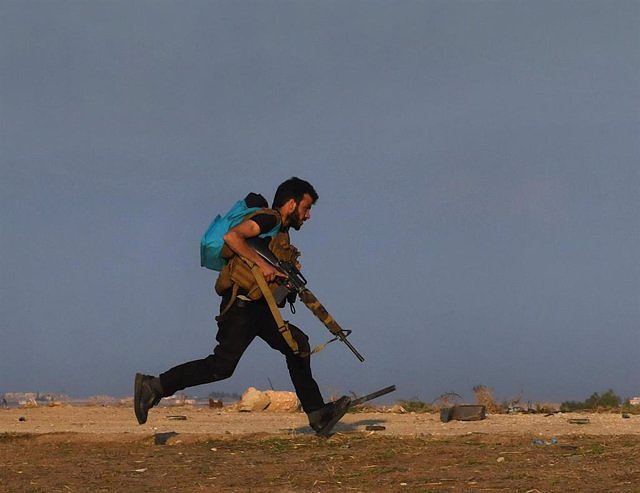 The Syrian Democratic Forces (SDF) have denounced the death of eight of its members in the bombardment carried out on Wednesday by the Turkish Army in the surroundings of the Al Hol camp for displaced persons, located in the northeast of the country.

The SDF Media Center has stated in a statement on its website that "the Turkish occupation launched an attack with warplanes and drones against security forces in Al Gol camp and Yerkin prison in Qamishlo, sheltering detained Islamic State terrorists and their families.

Thus, he highlighted that the attack "caused eight combatants to fall martyrs in the exercise of their duties", before pointing out that "the attack was carefully planned by the occupation, which seeks to allow the detained terrorists and their families to escape from the camp to that the terrorist organization resurfaces".

"These plans pose a serious threat to our region and to the world in general. The silence of the international community could exacerbate this threat," said the SDF Media Center.

The Al Hol camp, located in northeastern Syria and under the control of the SDF, houses thousands of relatives of members of the Islamic State, mostly women and children, although there are also detainees who are not related to the jihadist group. .

Various NGOs have raised alarms about the situation in the camp, the scene of murders and attacks in the absence of adequate living conditions, and have called on countries with nationals in Al Hol to speed up repatriations.

For his part, the commander of the SDF, Mazlum Abdi, said in an interview with the British BBC television channel that a ground offensive by Turkey "would lead to a second civil war in Syria and stop anti-terrorist operations against the State Islamic".

"As part of the international coalition - led by the United States - we fought against the Islamic State and defeated it. What Turkey is doing will undermine this," he warned, before adding that the SDF "will be busy protecting the people and families and they will not be able to stand guard in the camps (like Al Hol)."

Abdi has also pointed out that the Turkish Army has attacked civilian installations and has explained that "this will cause massive migration and internally displaced persons". "The consequences of this will be really bad, not only for us, but for the world," he stressed.

The Pentagon said on Wednesday that Turkey's attacks in Syria and Iraq "directly" threaten the security of US troops and called for an "immediate de-escalation" to "maintain focus on the mission to defeat Islamic State."

Turkey launched on Monday the 'Sword Claw' operation against Kurdish groups -- mainly the Kurdistan Workers' Party (PKK) and the People's Protection Units (YPG) in Iraq and Syria -- after the November 13 attack in Istanbul , which left six dead and more than 80 injured.

The Turkish government has accused the PKK of the attack and has said that the main suspect had received orders from the YPG -main member of the FDS-, although both the PKK and the FDS have disassociated themselves from the attack and have conveyed their condolences. to the victims.

‹ ›
Keywords:
Siria
Your comment has been forwarded to the administrator for approval.×
Warning! Will constitute a criminal offense, illegal, threatening, offensive, insulting and swearing, derogatory, defamatory, vulgar, pornographic, indecent, personality rights, damaging or similar nature in the nature of all kinds of financial content, legal, criminal and administrative responsibility for the content of the sender member / members are belong.
Related News