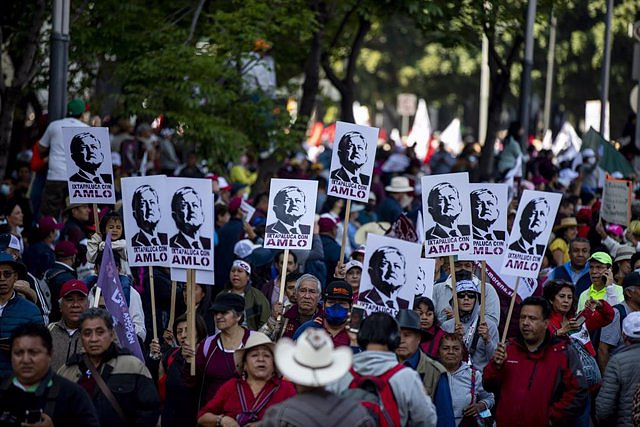 The head of Government of Mexico City, Claudia Sheinbaum, has reported that the march this Sunday that celebrates the four years of government of the country's president, Andrés Manuel López Obrador, has been attended by 1.2 million people.

Sheinbaum, with data from the Secretariat for Citizen Security, has also reported that there have been no injuries in the march called by the president, while boasting that "not a single glass was broken."

"Today something historic happened in Mexico City (...) Nearly 1.2 million people marched from the 31 states of the Republic and from Mexico City," the president said in a video published on her Twitter profile.

The governor thanked all the attendees, who "are always welcome" to the capital, "a city of freedoms", she has expressed before reiterating that she is excited to have achieved "a national historic march".

The demonstration started after 9:00 a.m. (local time) and, after five hours of marching, the Mexican president delivered a speech in which he listed the achievements of his administration, with special emphasis on their social aspect.

The president, who has ensured that freedom of expression is guaranteed during his administration, has named his policy model as "Mexican humanism", by allocating most of the State's resources to those most in need."

"Politics is, among other things, thought and action, and although when what is fundamental is the facts, it does not stop mattering how to define the model of government that we are applying in the theoretical field," said the Mexican leader, as collects the newspaper 'El Universal'.

Along these lines, López Obrador, accompanied by his cabinet, has stated that what is important in his government "is not quantitative, but qualitative."

López Obrador took to the streets of the capital to lead an extraordinary march of his supporters ahead of the 2024 elections and after the opposition demonstration against his proposal to reform the National Electoral Institute (INE).

AMLO's presence on the street, the first time he has marched in six years, took place after a rally last week that civil society organizations held in defense of the INE, the objective of a reform promoted by the Mexican president.

The opposition assures that the initiative, sent by the president to the Chamber of Deputies last April, is a strategy to eliminate the country's autonomous electoral body.

The reform proposes, among other points, a cut in the budget of the INE and of the political parties, in addition to the fact that the directors of the Institute and the electoral magistrates are chosen by popular vote and not by appointment of legislators, according to the Mexican affiliate. from CNN.