"Under my leadership, we will never align ourselves with EU law," he said. 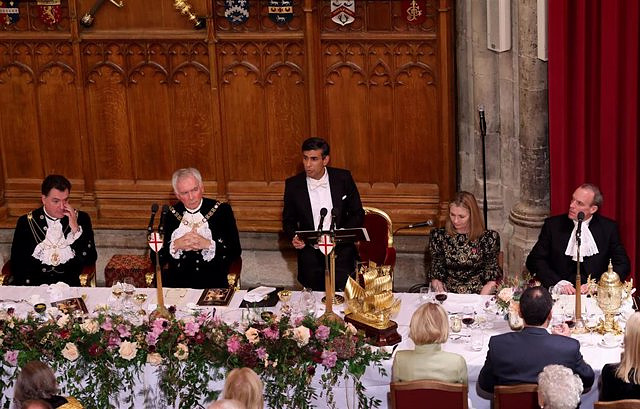 "Under my leadership, we will never align ourselves with EU law," he said.

The British Prime Minister, Rishi Sunak, has explained that China represents a "systemic challenge" to the values ​​and interests of the United Kingdom that is becoming more acute "as it moves towards even greater authoritarianism" in the context of the protests that have broken out in the country.

The British Prime Minister recalled that, within the framework of the protests in the Asian giant, the Chinese government has attacked a BBC journalist, alluding to the beatings Edward Lawrence received while practicing his profession.

"The media, and our parliamentarians, must be able to highlight these issues without sanction, including denouncing the abuses in Xinjiang and the restriction of freedom in Hong Kong," he said before highlighting "China's importance in world affairs." .

Sunak has reiterated from Guildhall, in London, the idea that it is necessary to "evolve" in the approach that the United Kingdom has towards China, since "the golden age has ended". "But we shouldn't rely on simplistic Cold War rhetoric either," he said.

In this way, he has specified that competitors such as China must be faced using "solid pragmatism" in the face of "great rhetoric". The British 'premier' has also added that "the quality and depth" of ties with "like-minded" allies must be increased.

"The United States, Canada, Australia, Japan and many others understand it too. So together we will manage this honing competition, even with diplomacy and compromise (...) And that is why we are ending the global reliance on authoritarian regimes , starting with Russian gas," he stressed.

On the other hand, he recalled that by the year 2050, the Indo-Pacific region will generate more than half of global growth compared to only a quarter of Europe and North America combined. "It is in our interest to keep these trade lines open," she said.

Sunak also dedicated a few words in his speech to ensure that the United Kingdom has evolved in post-Brexit relations with Europe, even committing itself to the initiative of the new European Political Community.

"But this is not about further alignment. Under my leadership, we will never align ourselves with EU law. Instead, we will foster respectful and mature relationships with our European neighbors on shared issues such as energy and illegal migration," he said. specified.

The prime minister has also referred to the war in Ukraine, assuring that "after years of pushing the limits, Russia is challenging the fundamental principles of the United Nations Charter." "We will be with Ukraine as long as necessary", he has reminded himself.

Likewise, Sunak has expressed that the United Kingdom will maintain or even increase its military aid to kyiv. "We will provide new air defense support to protect the Ukrainian people and the critical infrastructure on which they depend," he said.

"While the world gathers to watch the World Cup, I have seen how an explosive device had been hidden inside a child's soccer ball, seeking to turn it into a weapon of war," he said in his speech.

‹ ›
Keywords:
ChinaReino Unido
Your comment has been forwarded to the administrator for approval.×
Warning! Will constitute a criminal offense, illegal, threatening, offensive, insulting and swearing, derogatory, defamatory, vulgar, pornographic, indecent, personality rights, damaging or similar nature in the nature of all kinds of financial content, legal, criminal and administrative responsibility for the content of the sender member / members are belong.
Related News