Moscow criticizes the "destructive stance" of the West and calls on Berlin to "reconsider its position". 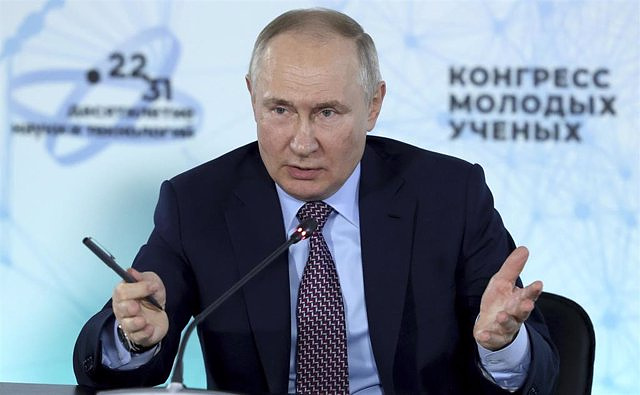 Russian President Vladimir Putin told German Chancellor Olaf Scholz this Friday that the attacks against Ukraine are "a forced and inevitable response" to "provocative attacks" by kyiv against Russian civilian infrastructure, including the bridge connecting the country with the Crimean peninsula.

The Kremlin has indicated in a statement published on its website that Putin and Scholz have held a conversation "at the initiative of Germany" and has confirmed that "various issues of the situation around Ukraine have been discussed."

"Putin has once again explained in detail the fundamental position of Russia in carrying out the special military operation. Emphasis has been placed on the destructive stance of Western states, including Germany, which supply the kyiv regime with weapons and train the Ukrainian Army," the Kremlin said.

In this sense, he stressed that "all this, together with exhaustive political and financial support, leads kyiv to totally reject the idea of ​​a negotiation and encourages radical Ukrainian nationalists to commit more bloody crimes against the civilian population."

"The president of Russia has asked Germany to reconsider its position in the context of the events in Ukraine," said the Kremlin, which has stressed that "the Russian Armed Forces had been content for a long time when it came to carrying out carry out bombardments against certain targets".

The Russian Presidency has indicated that "in this same context is the terrorist act against the Nord Stream 1 and 2 gas pipelines, the circumstances of which require a transparent investigation with the participation of specialized Russian structures."

Finally, the Kremlin has pointed out that Putin and Scholz have addressed the July agreement for the export of grain from Ukrainian ports and has called for "the unblocking of the export of Russian food and fertilizers." "An integrated application of the grain agreement is necessary, which implies removing all barriers to Russian supplies," he stressed.

‹ ›
Keywords:
RusiaUcraniaVladimir PutinAlemaniaCrimea
Your comment has been forwarded to the administrator for approval.×
Warning! Will constitute a criminal offense, illegal, threatening, offensive, insulting and swearing, derogatory, defamatory, vulgar, pornographic, indecent, personality rights, damaging or similar nature in the nature of all kinds of financial content, legal, criminal and administrative responsibility for the content of the sender member / members are belong.
Related News