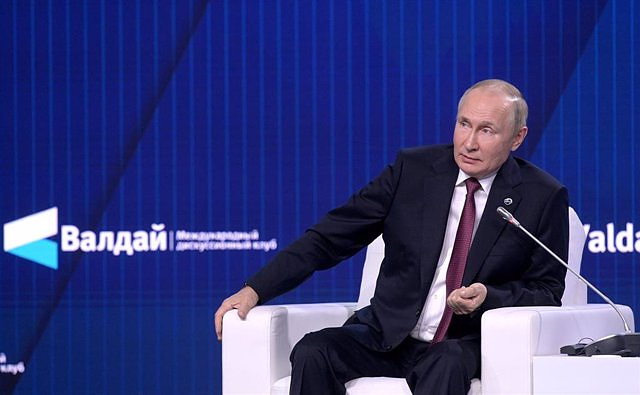 The facade of the headquarters of the Ministry of the Interior of the Czech Republic, in Prague, has dawned this Friday with a large image of the Russian president, Vladimir Putin, inside a body bag next to the Czech and Ukrainian flags.

"We know who our friends are who are bleeding for our freedom. And we also know who our enemies are and we will not let them steal our patriotism or our Czech Republic," Czech Interior Minister Vit Rakushan wrote on Twitter, accompanying the text. with this photograph.

On the occasion of the National Day of the Czech Republic that is celebrated this Friday, October 28 to commemorate the independence of Czechoslovakia in 1918, Rakushan has appealed to the patriotism that "unites society" and not that which hates other nations.

Rakushan has assured that "independence and freedom" achieved decades ago "has come to an end" and now "being face to face with the aggressor" he has asked his compatriots "with pride" for those values ​​supposedly at risk.

The Czech Republic has emerged as one of Ukraine's main partners, along with Poland and the Baltic States, since Russia announced the start of its so-called "special operation" eight months ago.

According to estimates by the Ministry of Defense, Prague has delivered to Ukraine so far this year military equipment worth 1.9 billion euros, as well as another item valued at almost 168 million euros for other types of support. Since the beginning of the war, some 450,000 Ukrainian citizens have found refuge within the borders of the Czech Republic.

‹ ›
Keywords:
RusiaVladimir PutinRepública ChecaMinisterio Del InteriorUcrania
Your comment has been forwarded to the administrator for approval.×
Warning! Will constitute a criminal offense, illegal, threatening, offensive, insulting and swearing, derogatory, defamatory, vulgar, pornographic, indecent, personality rights, damaging or similar nature in the nature of all kinds of financial content, legal, criminal and administrative responsibility for the content of the sender member / members are belong.
Related News