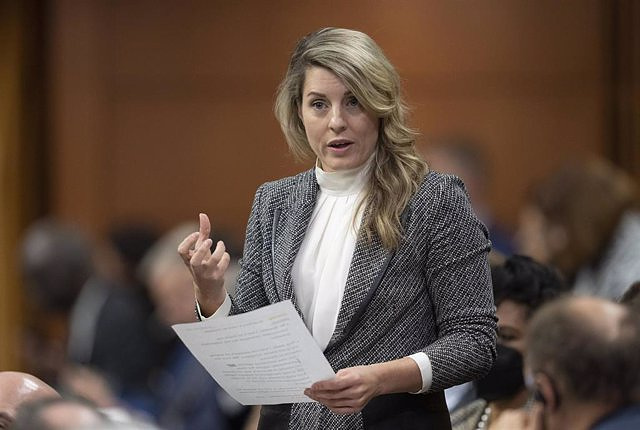 The Canadian Foreign Minister, Mélanie Joly, has indicated that arms, financial and intelligence aid to Ukraine are a way of strengthening the Ukrainian position in the face of future negotiations with Russia.

"Russia is not at the negotiating table at all. Therefore, our goal at the moment is simply to strengthen Ukraine's position on the ground through military aid, intelligence sharing and financial support," he said. Joly.

In an interview for the British newspaper 'The Guardian', the Canadian diplomatic representative has shown her conviction that the war in Ukraine will be resolved with an agreement between the parties, since "this has been the case in all conflicts".

Joly has ruled out that there is reluctance among the members of the Atlantic Alliance to continue supplying weapons to Ukraine and has influenced Canada's promise to send nearly 500 million euros in military aid to the Ukrainian Armed Forces.

Regarding the incessant Russian attacks on Ukrainian energy infrastructure, Joly has insisted that this move by Moscow has only brought the allies together and increased their future support for Ukraine.

"We need to make sure that the Ukrainians can overcome this difficult winter," said the Canadian representative, who has assured that Ukraine's allies are seeking solutions to the energy crisis.

‹ ›
Keywords:
RusiaCanadaUcrania
Your comment has been forwarded to the administrator for approval.×
Warning! Will constitute a criminal offense, illegal, threatening, offensive, insulting and swearing, derogatory, defamatory, vulgar, pornographic, indecent, personality rights, damaging or similar nature in the nature of all kinds of financial content, legal, criminal and administrative responsibility for the content of the sender member / members are belong.
Related News