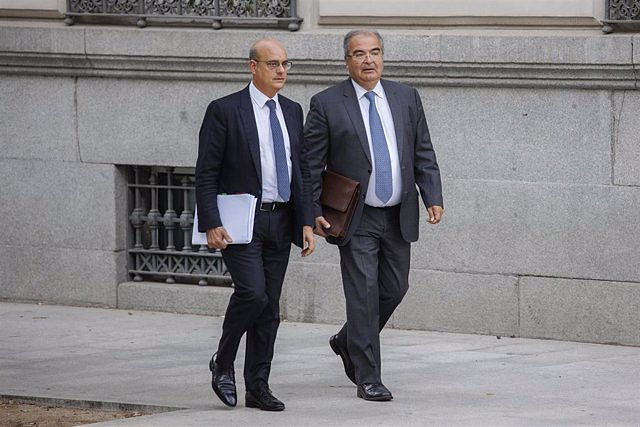 The judge of the National Court that is investigating whether Banco Popular committed an alleged crime of fraud against investors or breach of the duties of information in the capital increase carried out in 2012 summons for this Wednesday, November 30, two former officials of the entity.

The instructor, Santiago Pedraz, will take a statement as investigated from the former corporate and financial director of the bank Jacobo González-Robatto and the former president of the Audit Commission José Ramón Rodríguez.

The two former directors will testify after the instructor has agreed to what was requested by the Prosecutor's Office, which warned about "the need" for both to appear in this case that was born last June, when Pedraz agreed to admit two different complaints for processing.

They focused on the expansion of the banking entity, considering that they could have incurred in "omissions and biased and distorted information to raise capital that otherwise would not have been possible to obtain, breaching the information duties established in order to guarantee the stock market transparency.

These summonses come after the judge took a statement this month from the former president of the bank Ángel Ron, who ruled out that irregularities had been committed in the capital increase carried out in 2012, while defending that the brochure in which the conditions of the same was "absolutely clear and transparent".

The magistrate has also listened to the former vice president of the entity, Roberto Higuera, who maintained in his statement that all the operations were carried out correctly, recalling that the annual accounts for 2012 --the year in which Banco Pastor was absorbed-- were audited by the consulting firm PwC.

The consultant herself also appeared before the magistrate, to whom she pointed out that she did not appreciate any irregularity or anomaly when reviewing the accounts of Banco Popular for the year 2012, which in her opinion did express the real image of the entity.

It should be noted that the facts in which Pedraz is investigating are different from those being investigated in another court of the AN, the Investigation Center Number 4. Specifically, Judge José Luis Calama is investigating two phases of the Popular resolution process: the alleged accounting irregularities of the entity in 2016, with the capital increase that year, and the leaks to the press a year later that would have led to its resolution in mid-2017.

In one of the admitted complaints, presented by Miguel Ángel Pereira and on behalf of another 50 people who lost their money as a result of the aforementioned capital increase, the financial situation of the bank in the years 2010, 2011 and 2012 is reported and listed the indications by which it is understood that the truth was misrepresented in the information given for the 2012 enlargement.

The second complaint, filed on behalf of the mercantile companies Cerquia Gestión and Cercupenta and Carlos Cercadillo, is directed against Banco Santander, Ron, the PWC consultant and the latter's auditor, José María Sanz. In addition, the letter expands the object of the previous one by referring to crimes of false accounting since 2008 as well as unfair administration.

‹ ›
Keywords:
Audiencia NacionalBanco Popular
Your comment has been forwarded to the administrator for approval.×
Warning! Will constitute a criminal offense, illegal, threatening, offensive, insulting and swearing, derogatory, defamatory, vulgar, pornographic, indecent, personality rights, damaging or similar nature in the nature of all kinds of financial content, legal, criminal and administrative responsibility for the content of the sender member / members are belong.
Related News