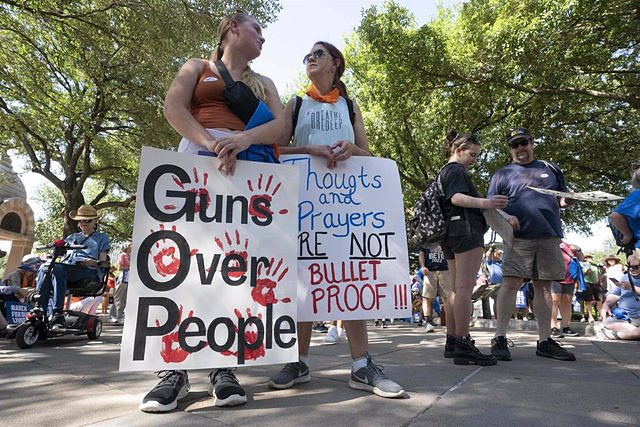 Thousands of protesters have taken to the streets of the main cities of the United States this Saturday to demand greater control over the possession of weapons after the recent massacres.

There are some 300 protests called in Washington, Florida, Michigan, Portland or New York in a wave that began after the death of 19 minors and two teachers murdered in a school in Uvalde, Texas, and the murder of ten black people in a Buffalo supermarket , New York.

The demonstrations have been called by the March for Our Life, an organization founded by student survivors of the massacre perpetrated at a Parkland, Florida, institute in 2018, when 17 people died.

"Enough," declared the mayor of the District of Columbia, Muriel Bowser, during the demonstration in the federal capital. "I can speak as a mayor, as a mother, for the millions of Americans and American mayors who are asking Congress to do its job. And its job is to protect us, protect our children from gun violence," she said. the CBS network.

All the speakers have appealed to the senators, the main obstacle to imposing greater control on the possession of weapons, and have warned them that they will not be re-elected if they do not act.

"If our government can do nothing to prevent 19 children from being murdered in their own school, from being beheaded, the time has come to change who rules," said David Hogg, a survivor of the Parkland attack.

Another survivor and founder of the March for Our Lives, X González, has recalled that "they are killing us" and has implored Congress to intervene.

"This time it's different because it's not a political issue, but a moral one. Not right and left, but good or bad. It's not about condolences and prayers, but about courage and action," Yolanda King argued for her part. granddaughter of Martin Luther King.

There have also been demonstrations in such emblematic places as Parkland or Brooklyn, in New York, where the New York mayor, Eric Adams, has joined the protest.

"Children are not replaceable, but senators are. Vote", or "I want to feel safe at school" have been some of the slogans written on banners and slogans have been chanted against the National Rifle Association (NRA), the main group of pressure contrary to the regulation of the possession of weapons.

The first March for Our Lives gathered more than 200,000 people in 2018. Now the organizers have opted for smaller demonstrations in more cities and some 50,000 people are expected in Washington.