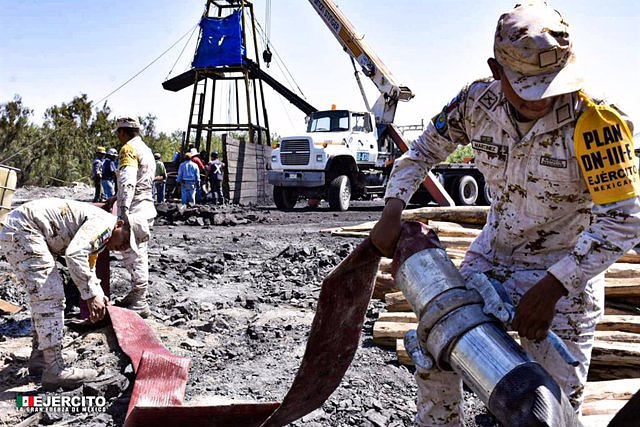 Mexico's rescue services have accelerated the rescue of the ten miners who are trapped in a coal mine in the town of Sabinas, Coahuila, in the north of the country, as they extract water with the help of pressure pumps.

The miners, who have been trapped underground for more than 24 hours after an underground river caused a flood and blocked the exits of the mine, are found at a depth of 34 meters, according to what 'El Universal' has learned.

So far, there are five extraction pumps that add up to 150 horsepower, in addition to two others that are being installed and could add another 50. Likewise, 150 members of the Mexican Army, the National Guard or Civil protection.

The governor of Coahuila, Miguel Ángel Riquelme Solís, has expressed his support for the families and has told them that "everything within reach will be done to rescue the workers alive."

"Each mine presents particular situations, this case is different from the last one (the one that occurred in June 2021 in the community of Rancherías), since here the plans were not updated and there was no notion of where the shots came from or the conditions of the mine," he declared in statements reported by 'El Diario de Coahuila'.

For her part, the national coordinator of Civil Protection, Laura Velázquez, has reported that five of the miners have already managed to get out and are receiving medical attention. Two have already been discharged and two are in critical condition.

One of the mine workers was the one who reported what happened to Civil Protection, after he managed to get out safe and sound through an old mine.

The mine began operations in January 2022, and to date no complaint of any type of anomaly had been registered. However, these types of accidents are common in the region, the last one recorded in June 2021, in which seven people lost their lives after the area where they worked was flooded.

‹ ›
Keywords:
MéxicoCarbón
Your comment has been forwarded to the administrator for approval.×
Warning! Will constitute a criminal offense, illegal, threatening, offensive, insulting and swearing, derogatory, defamatory, vulgar, pornographic, indecent, personality rights, damaging or similar nature in the nature of all kinds of financial content, legal, criminal and administrative responsibility for the content of the sender member / members are belong.
Related News