The Pope reiterates his apologies to young Inuit in Canada 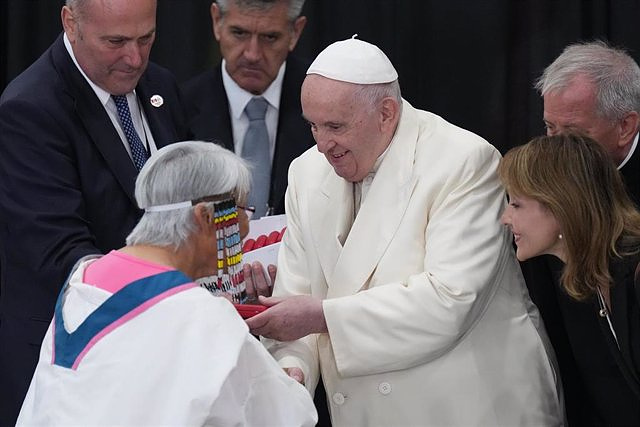 The Pope has reiterated his apologies for the abuses committed by the Catholic Church of Canada against the young survivors of ecclesiastical schools in the country, in a speech before a crowd in Iqaluit, the territory of the Inuit in the Polar Circle.

"I want to tell you how sorry I am," Pope Francis lamented in his last meeting on his five-day trip to Canada, which has included private meetings with survivors, as well as public performances by traditional singers and musicians, which have included singing traditional throat and drum dance.

The Pope delivered his speech in Spanish, which was later translated into English and Inuktitut. In addition, he has apologized in the Inuit language.

"I thank you for having the courage to tell your stories and share your great suffering that I could not imagine," he said. Likewise, she has added that "this only renewed" her "indignation and the shame that she had felt for months", the newspaper 'The Globe and Mail' has collected.

In addition to apologizing for the "evil perpetrated by not a few Catholics", the Pope has encouraged the young people he has addressed to "take charge of their freedom, not to be afraid of making strong decisions, and to go every day towards the light", reported 'Vatican News'.

When the Pope has finished his speech, some of the attendees applauded and were moved, while part of the crowd showed protest banners, the CBC News television channel reported.

Still, the trip to Iqaluit is the first papal visit to this territory, marking a turning point in the region's relations with the Catholic Church.

"I am very happy that Pope Francis can come here and I am happy that I can see this," Ooleepika Veevee told CBC News, before adding that she "came all the way from Rome to apologize."

Those attending the rally reminded the Pope of the "intergenerational trauma" of his relatives and neighbors. "They never talked about anything, about their experiences. Because they were hurt inside (...). Many who have never gone to a residential school are also affected by this," Raigelee Alorut explained to the same television channel.

Previously, Tanya Tungilik - daughter of Marius Tungilik, victim of abuse in a Catholic residential school - had been one of the people who have met with the Pope.

In his case, Tungilik has recounted the story of his father, who died in 2012, who was one of the first survivors to publicly tell his story as a victim when he was a student at the Joseph Bernier School in Chesterfield Inlet, Nunavut, with the aim that the Church accountable.

"The long-term effects of his alcoholism ended my father's life. He died alone in his bed in December 2012. He was just 55 years old," said Tanya, who pointed out that the reason for his death is due to " reckless behavior of the Church, which led him to drink".

Finally, Tanya has asked the Pope to identify and bring those responsible to justice, as well as apologize and open the archives to make the documents public, all with the aim of "achieving reconciliation with our people."

‹ ›
Keywords:
Papa FranciscoCanada
Your comment has been forwarded to the administrator for approval.×
Warning! Will constitute a criminal offense, illegal, threatening, offensive, insulting and swearing, derogatory, defamatory, vulgar, pornographic, indecent, personality rights, damaging or similar nature in the nature of all kinds of financial content, legal, criminal and administrative responsibility for the content of the sender member / members are belong.
Related News