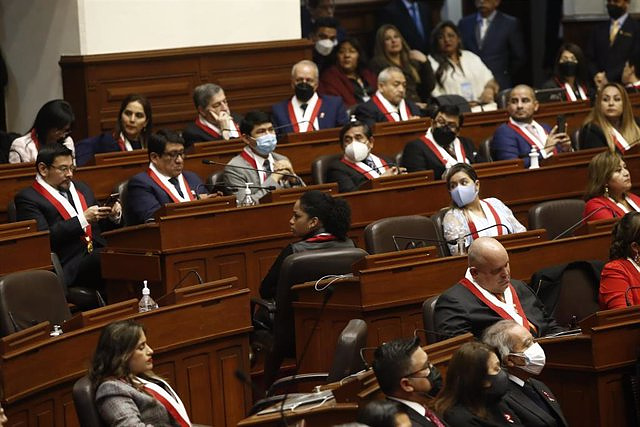 The Peruvian Prosecutor's Office has requested this Sunday to the Supreme Court the impediment of leaving the country for Congressman Freddy Díaz Monago, after not having appeared at the trial after being accused of having raped a congressional worker in the parliamentary headquarters itself.

"As part of the investigation that follows, on Saturday, July 30, the Prosecutor's Office received the statement of the victim in the Gesell chamber, as well as the testimony of witnesses. For his part, the investigated party did not attend the scheduled summons," The Public Ministry has reported in a statement, alleging said absence to request that Díaz Monago be prohibited from leaving the country, 'La República' has reported.

Last Thursday, a worker from the Peruvian Parliament denounced the congressman, from the Alliance for Progress (APP), for a crime of rape.

"Today the Aurora National Program of the Ministry for Women provided emotional support and legal attention to a woman who reported having been a victim of rape by Congressman Freddy Díaz Monago. We are assisting the victim. We urge the Prosecutor's Office to act quickly of the case," the ministry published on its social networks.

As 'El Comercio' has learned, the complainant indicated that the attack would have taken place in an office of the parliamentarian. Likewise, the alleged victim reported that she was drinking alcohol with the congressman while they were talking about labor issues. After that, taking advantage of her unconscious state, the parliamentarian would have committed the rape.

Along these lines, the alleged victim has indicated that afterwards he did not remember anything of what happened until 4:00 a.m. (local time) when he woke up with traces of sexual abuse, such as burning in his private parts and his torn clothes.

After the case was made public, the party in which Díaz is a member announced his immediate expulsion.

"Given the serious complaint filed against Congressman Fredy Díaz Monago for the crime of rape, the APP bench has decided to expel him immediately. We condemn this execrable act of sexual violence and request the prompt intervention of the Office of the Attorney General and the Power Judicial," the bench said in a statement.

‹ ›
Keywords:
PerúJosé Antonio Monago
Your comment has been forwarded to the administrator for approval.×
Warning! Will constitute a criminal offense, illegal, threatening, offensive, insulting and swearing, derogatory, defamatory, vulgar, pornographic, indecent, personality rights, damaging or similar nature in the nature of all kinds of financial content, legal, criminal and administrative responsibility for the content of the sender member / members are belong.
Related News