The magistrate of the Supreme Court Andrés Palomo, in charge of the investigation against the PP deputy Alberto Casero, has proposed to address a request to Congress to proceed criminally against the leader upon seeing rational indications of alleged crimes of prevarication and embezzlement, for certain agreements and service contracts that he made when he was mayor of Trujillo (Cáceres) in 2017 and 2018. 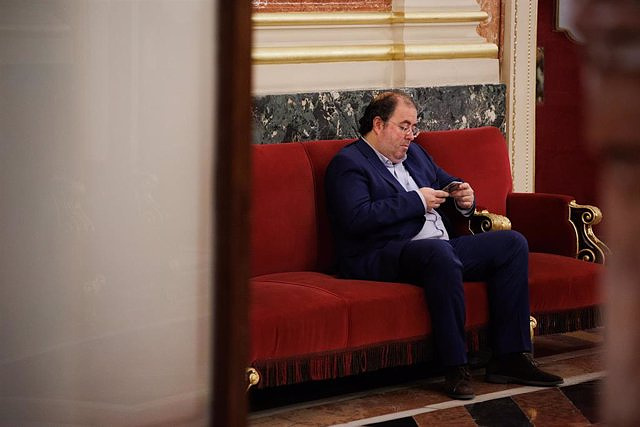 The magistrate of the Supreme Court Andrés Palomo, in charge of the investigation against the PP deputy Alberto Casero, has proposed to address a request to Congress to proceed criminally against the leader upon seeing rational indications of alleged crimes of prevarication and embezzlement, for certain agreements and service contracts that he made when he was mayor of Trujillo (Cáceres) in 2017 and 2018.

Palomo has raised this Monday a reasoned statement to the Second Chamber of the Supreme Court in which he collects indications that Casero, in his capacity as mayor, agreed with different people and entities, service contracts, sponsorship or agreements, "in breach of all kinds of formality required for this purpose by the applicable regulations in each case".

This is a necessary procedure to be able to continue with the abbreviated procedure, since it implies a formal indictment that requires prior authorization from Congress due to Casero's status as deputy.

The Supreme Court has been investigating the leader of the PP since last March, when the Court of First Instance and Instruction of Trujillo raised a reasoned statement in which the facts attributed to the then mayor were described as an alleged continued crime of administrative prevarication. The Prosecutor's Office, for its part, understood that there were also indications of an alleged crime of embezzlement.

Casero asked the Supreme Court to file the procedure against him, considering that there are no indications that allow him to be attributed prevarication or embezzlement in the agreements and service contracts he made when he was mayor of Trujillo (Cáceres) in 2017 and 2018. The Prosecutor's Office opposed said request and now the judge has confirmed his decision not to close the case and has elevated the case to the Second Chamber.

In 13 pages, Judge Palomo has explained that Casero's conduct "not only involves repeated and admitted administrative irregularities", but a "mode of proceeding" that identifies "his voluntarism regardless of any interpretation with a loophole in the rationality of the legal system ".

Thus, he has underlined the "prohibited verbal hiring or without any processing or advertising in the cases that the amount required" and the "avoidance of control mechanisms" by the former mayor. And he has influenced the "direct assumption of payments" for the integrity of the services provided to an entity in which the municipality was only a part, something that fits with the crime of prevarication.

In addition, the magistrate has assured that the facts investigated may also constitute the crime of embezzlement, since they also reveal that he exceeded his powers of administration of the assets of the consistory, "causing real damage to it" for an amount that would exceed 50,000 euros for payments that "did not compete with the City Council or were made for services not provided."

Since the investigations against him began, the PP leader has defended that, although there may have been administrative problems in the agreements and contracts being investigated, there has been no prevarication on his part.

In court and later in a letter addressed to the judge, Casero recognized that "the processing of these contracts and agreements did not follow the proper administrative procedures", and that, therefore, "they can be described as irregular or, if you want, even of illegals." He stressed, however, that "they do not represent a misuse of power."

He insisted that "no matter how many administrative errors there may be, and that given the operation and precariousness of the City Council's resources, they are perfectly understandable, all the contracted work was carried out, as evidenced in the corresponding sentences that condemned the payment of amounts to the City hall".

In his opinion, "there is no absolute lack of foundation to adopt them, nor an omission of procedures whose illegality is gross and manifest, contrary to reason and the laws, capriciously dictated."

Within the framework of the procedure, several contracts that are under suspicion are investigated. According to the documentary and testimonial evidence in the case, in March 2017 Casero --in his capacity as mayor-- hired a psychologist to provide services to the consistory in matters of gender violence. "He did not inform or provide the City Council with the signed contract, nor was the contracting file instructed, nor did he obtain a report from the contracting authority on the need for the service, nor was the expense approved," the judge pointed out.

Likewise, it appears that in September 2017, the then mayor of the PP signed a contract with the president of the Chamber of Commerce of Peru in Spain, committing the City Council to the payment of 25,000 euros, without informing the economic and legal services of the City Council, without the agreement being previously approved and without submitting it to public information or being published in the BOE.

That same year, Casero would have verbally agreed to contribute 18,000 euros to an event organized by the Bon Vivant Cultural Association, without following any procedure and without informing the City Council services.

In June 2018, he signed a sponsorship contract with the same association, committing himself to a contribution of 18,000 euros, also assuming other costs, without following any contracting procedure.

There are also two other facts. A contract in 2018 with the company Icaro Consultores en Comunicación, SLU, for the organization of an event for an amount of 14,303 euros plus VAT, without informing the competent services and without following the appropriate procedure. And another contract, from that same year, with Radio Interior SL --a contract for communication services and promotion of the Trujillo Cheese Fair-- for an amount greater than 15,000 euros, resorting to the procedure of the minor contract when, due to the amount, should be tendered in an open procedure.

‹ ›
Keywords:
PPTribunal SupremoCorrupción
Your comment has been forwarded to the administrator for approval.×
Warning! Will constitute a criminal offense, illegal, threatening, offensive, insulting and swearing, derogatory, defamatory, vulgar, pornographic, indecent, personality rights, damaging or similar nature in the nature of all kinds of financial content, legal, criminal and administrative responsibility for the content of the sender member / members are belong.
Related News