The Ibex 35 trades with losses in the middle of the session and puts 7,900 points in danger 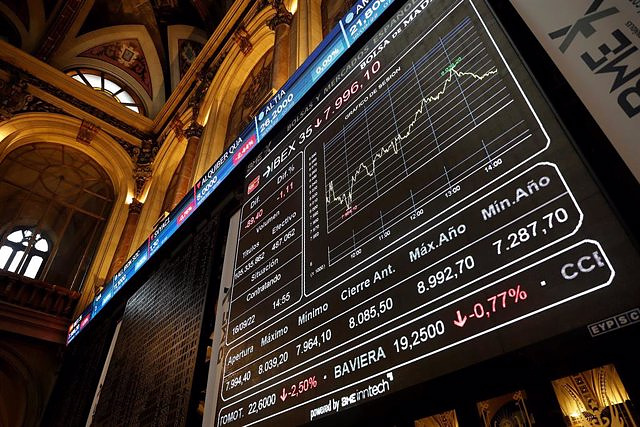 The main indicator of the Spanish stock market, the Ibex 35, registered losses of 0.83% in the middle of the session, which endangered the level of 7,900 points at the beginning of a week that is marked by the decision of the Federal Reserve on interest rates, which could surprise with a rise of 100 basis points.

Specifically, at 12:00 p.m., the national selective left 64.9 points, equivalent to that 0.83%, and stood at 7,918 integers. The rest of the stock markets also traded with losses in the middle of the session, although larger than those of the Ibex 35: Paris fell 1.63%; Milan, 1.4%, and Frankfurt, 0.96%. The British Stock Exchange, for its part, does not open this Monday due to the funeral of Queen Elizabeth II.

Investors will be watching this week for the Federal Reserve's interest rate decision, which could surprise with a 100 basis point hike, as well as those from other central banks such as the Bank of England and the Bank of Japan.

Back to the Ibex 35, Acciona was the most bearish value, leaving 2.67%, followed by Acciona Renewable Energy, with 2.38%. On the contrary, Aena was revalued 1.56% in the heat of the increase in international travelers and Naturgy, 1.17%. In the continuous market, Prim left 4.58% at the same time that Talgo rose 4.3%.

Finally, the price of the euro against the dollar stood at 0.9976 'greenbacks' in the middle of the session, while the Spanish risk premium stood at 114 basis points, with the interest required on the ten-year bond at 2.938 %.

‹ ›
Keywords:
IBEX 35Sector Financiero
Your comment has been forwarded to the administrator for approval.×
Warning! Will constitute a criminal offense, illegal, threatening, offensive, insulting and swearing, derogatory, defamatory, vulgar, pornographic, indecent, personality rights, damaging or similar nature in the nature of all kinds of financial content, legal, criminal and administrative responsibility for the content of the sender member / members are belong.
Related News