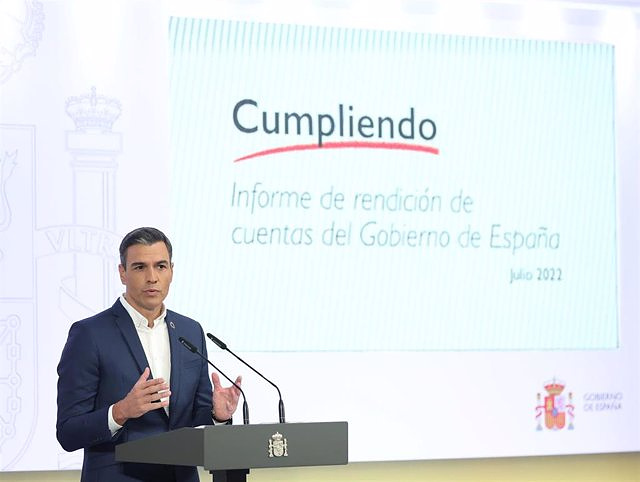 The President of the Government, Pedro Sánchez, confirmed this Friday that pensions will rise according to the Consumer Price Index (CPI) and will be left out of the income pact that the Government is requesting from social agents to deal with escalating inflation.

"There is no object of negotiation and the law has to be complied with," the president remarked from the Moncloa Complex during the presentation this Friday of the accountability report of the Government of Spain, which bears the title of 'Compliance'.

The president has defended the approval of the pension reform at the end of last year and its entry into force on January 1, 2022 and has stressed that the law is in line with the recommendations of the Toledo Pact.

The Cortes Generales approved the first part of the pension reform at the end of 2021, which recovers the CPI as a reference to revalue benefits and which means the end of the sustainability factor, which has not come into force.

With this Law, the consolidated text of the General Social Security Law was modified and the main recommendations of the Toledo Pact in autumn 2020 are collected, which are also integrated into component 30 of the Recovery, Transformation and Resilience Plan. Its content was agreed upon with the most representative trade union and business organizations in the tripartite social agreement.

‹ ›
Keywords:
PensionesPedro Sánchez
Your comment has been forwarded to the administrator for approval.×
Warning! Will constitute a criminal offense, illegal, threatening, offensive, insulting and swearing, derogatory, defamatory, vulgar, pornographic, indecent, personality rights, damaging or similar nature in the nature of all kinds of financial content, legal, criminal and administrative responsibility for the content of the sender member / members are belong.
Related News