People incapacitated by a court ruling will be able to swear to the flag, after a legal change of Defense 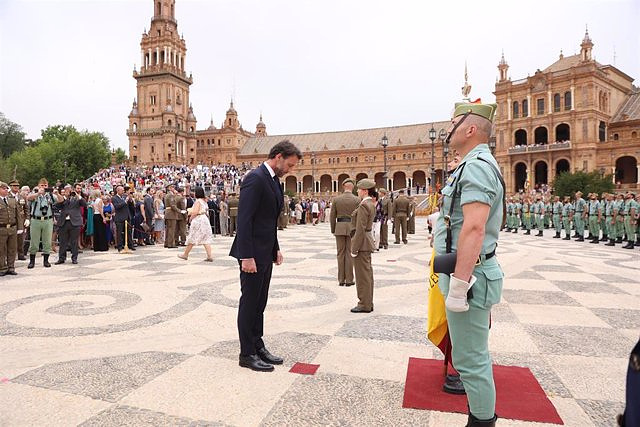 The Ministry of Defense has modified a ministerial order to allow those declared incapable by a final court ruling to swear to the flag, something that had been vetoed since this act of "commitment to the defense of Spain" was regulated in 2004.

The reform, published in the Official State Gazette (BOE), opens the door for those persons declared incapable by a judge to also be able to request their desire to swear to the flag, for which in any case other requirements must be met, such as having the nationality Spanish or be of legal age.

The swearing-in of the flag is compulsory for the military, but the opportunity is also opened to those Spaniards who, without wanting to join the Armed Forces on a professional basis, want to "express their commitment to the defense of Spain", according to the order that establishes the necessary procedure to request and carry out this benefit.

The law provides that citizens swear the flag in those units closest to their place of residence or with which they have some link, "to the extent that the strengthening of the bonds of union between citizens and their Armed Forces begins with the relationship between those and the units located in their environment".

In the civil act, the Head of the Army, Air or Land Army Unit to which the citizen wishes to swear will pronounce the following words: "Spaniards! Do you swear or promise by your conscience and honor to keep the Constitution as a fundamental norm of the State, with loyalty to the King and, if necessary, give your life in defense of Spain? A sentence to which the citizen must reply: "Yes, we do!".

After taking the oath, each of the participants will approach the Spanish flag to kiss it in a symbolic gesture that seals the commitment to Spain.

Once the Flag Swearing-in has been carried out, the citizen will continue in the same voluntary effort to contribute to the common good and to support the security and defense of Spain.

‹ ›
Keywords:
Ministerio De Defensa
Your comment has been forwarded to the administrator for approval.×
Warning! Will constitute a criminal offense, illegal, threatening, offensive, insulting and swearing, derogatory, defamatory, vulgar, pornographic, indecent, personality rights, damaging or similar nature in the nature of all kinds of financial content, legal, criminal and administrative responsibility for the content of the sender member / members are belong.
Related News