The Socialists celebrate their XXVI Congress next weekend in Madrid in which the Spanish president will replace the Greek Papandreou. 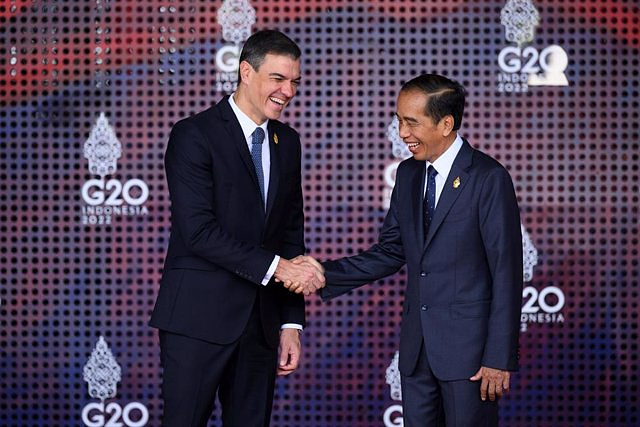 The President of the Government and Secretary General of the PSOE, Pedro Sánchez, will seek to strengthen the capacity of influence in the world of the Socialist International, which next weekend celebrates its XXVI Congress in Madrid, in which it will lead this organization replacing the Greek Yorgos Papandreou.

Sánchez will try to give a new impetus to this organization that brings together 132 socialist, social democratic and labor formations and will try to have a greater presence in organizations such as the United Nations, as well as strengthen relations with progressive parties in Latin America and Africa, according to what they pointed out to Europa Press sources of the leadership of the PSOE.

At this time, the Socialist International needs a relaunch and a facelift, according to party sources and Sánchez will try to start a new stage in which international influence and visibility in international forums increase.

At the time he announced his candidacy --on September 22 in New York-- the Chief Executive already announced that he intended to make internal reforms to modernize the organization. Thus, he affirmed that he aspires to contribute his experience to start "a new time in this organization" and to continue the legacy of his "friend Yorgos Papandreou (...) and leaders such as Willy Brandt, Pierre Mauroy or the current Secretary General of Nations United, Antonio Guterres".

One of the goals that Sánchez could face from now on is the return of the SPD, a historic party that left the organization a decade ago. The return of the Germans would be a boost for the Socialist International, after a period of progressive loss of influence, marked by the decline of weighty socialist parties such as the French and Italian.

Sánchez will also try to strengthen the relationship with the progressive forces in Latin America, which have increased the weight of this political space in the region after the latest victories of Lula da Silva (Brazil), Gabriel Boric (Chile) and Gustavo Petro (Colombia). among others, with whom the socialists see that there is closeness even though their parties do not belong to the International.

This is indicated by the Secretary for International Policy and Development Cooperation, Hana Jalloul, in an article published this Friday in El Socialista. "An opportunity opens up to work more closely with the progressive forces of Latin America, which are leading more and more governments on the continent, and also with African countries, taking advantage of the historical ties, the closeness and the success that the recipes are showing. social democrats in global challenges," he said.

"This 26th Congress will mark a new stage for the Socialist International. From the unity and solid convictions that unite us, we will come out of this conclave strengthened and with renewed energy to face the current challenges and continue advancing in the construction of a new progressive internationalism global order and a fairer international order," he adds.

In the Congress next weekend - where Sánchez will be proclaimed president since there are no more candidates for the position - several panels will be held on "conflict resolution, energy policy, climate change and decent work" chaired by Sánchez, Papandreou and the Portuguese Prime Minister, Antonio Costa.

Also participating will be the Deputy Secretary General of the PSOE and Minister of Finance, María Jesús Montero, the Third Vice President and Minister for the Ecological Transition, Teresa Ribera, the Minister of Foreign Affairs, the European Union and Cooperation, José Manuel Albares and the president of the socialist group in the European Parliament, Iratxe García.

The XXVI Congress will be held from November 25 to 27, at IFEMA and previously, from Tuesday 22 to Thursday 24, the Spanish socialists will also host the XXII Congress of the Socialist International Women as well as the meeting of the IUSY Presidium, to be held at the federal headquarters of the PSOE on Ferraz street.

The delegates' discussions will revolve around the claim of social democratic policies as a solution to get out of the current crisis, as opposed to the recipes applied in the financial crisis of 2008.

‹ ›
Keywords:
GreciaPedro SánchezPSOE
Your comment has been forwarded to the administrator for approval.×
Warning! Will constitute a criminal offense, illegal, threatening, offensive, insulting and swearing, derogatory, defamatory, vulgar, pornographic, indecent, personality rights, damaging or similar nature in the nature of all kinds of financial content, legal, criminal and administrative responsibility for the content of the sender member / members are belong.
Related News