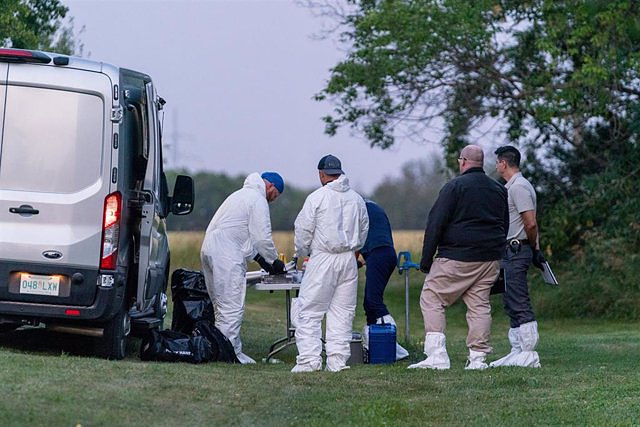 One of the two brothers suspected of committing the murder of 10 people and injuring 18 others at various points in Canada has been found dead with injuries that do not appear to have been self-inflicted, police sources reported Monday.

The Canadian Police (RCMP) found the body of Damien Sanderson, 31, on Sunday afternoon in a green area in the James Smith Cree Nation community, in the province of Saskatchewan, in the center of the country, according to reported 'The Globe and Mail'.

The other suspect, identified as Myles Sanderson, 30, remains at large, although the RCMP has warned the public that he may seek medical attention, as they believe he could also have suffered injuries.

The chief of police of the city of Regina -the second largest city in Saskatchewan-, Evan Bray, has detailed that the most recent information is that Myles Sanderson is in the city, but has warned that the information has a day old.

The RCMP on Sunday launched a manhunt for two people for stabbing dozens of people, injuring 18 people and taking the lives of ten others at various locations in the province, including the James Smith Cree Nation community.

"At this point in the investigation, we have located ten lifeless bodies and 18 injured in 13 locations," explained a police spokeswoman at a press conference, announcing that the RCMP issued an alert throughout the province about "two dangerous people ".

Agents have recommended citizens to take precautions. "If you are in the area, seek immediate shelter. Do not leave a safe place and be careful when allowing other people to enter your residence," the police force has warned. He has also asked neighbors not to approach suspicious people or pick up individuals on the highways.