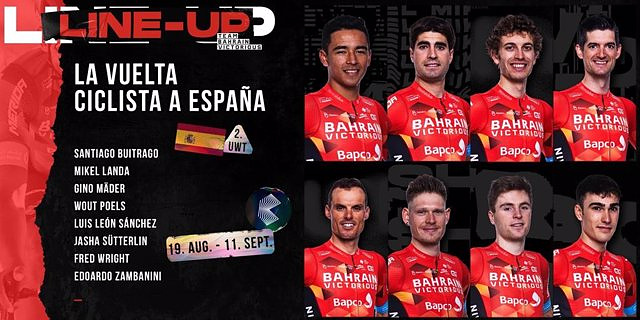 The Spanish cyclist Mikel Landa will be the leader of the Bahrain-Victorious team in La Vuelta 22, which starts this Friday, August 19 in Utrecht (The Netherlands), accompanied by the Colombian Santiago Buitrago or the Swiss Gino Mäder.

"Bahrain-Victorious heads into the big start of La Vuelta with a strong team and high hopes for both overall and stage wins," the team said in a statement.

As leader and host will be Mikel Landa, who faces his sixth Vuelta a España with the conviction of being able to surpass his best performance, which was a 25th place in 2015 with a stage win included.

Landa, third in the Giro d'Italia 2022, repeats as leader along with the Swiss sensation Gino Mäder, winner of the youth classification and fifth overall in the last Vuelta a España.

Sporting director Franco Pellizotti -a veteran of 13 'Grand Tours'- believes there is a chance for the team to perform well again after winning a stage, the white mesh and the team classification in 2021.

"For the general we have Mikel. Let's see how is his condition. With Gino Mäder as co-leader, we have a strong team for all terrains. We are looking to do a good time trial and have 3 good stages in Holland to reach Spain without losing time" , valued.

In addition, Pellizotti is convinced that they can also make a difference in those mountain stages, working for the general classification or looking for partial victories with the Colombian Santiago Buitrago or Fred Wright.

‹ ›
Keywords:
ColombiaPaíses Bajos
Your comment has been forwarded to the administrator for approval.×
Warning! Will constitute a criminal offense, illegal, threatening, offensive, insulting and swearing, derogatory, defamatory, vulgar, pornographic, indecent, personality rights, damaging or similar nature in the nature of all kinds of financial content, legal, criminal and administrative responsibility for the content of the sender member / members are belong.
Related News