Lesmes considers resigning to force the renewal of the CGPJ

The president of the Supreme Court (TS) and the General Council of the Judiciary (CGPJ), Carlos Lesmes, plans to resign to force the renewal of the governing body of the judges, as he admitted in conversations with the press after the opening act of the court year. 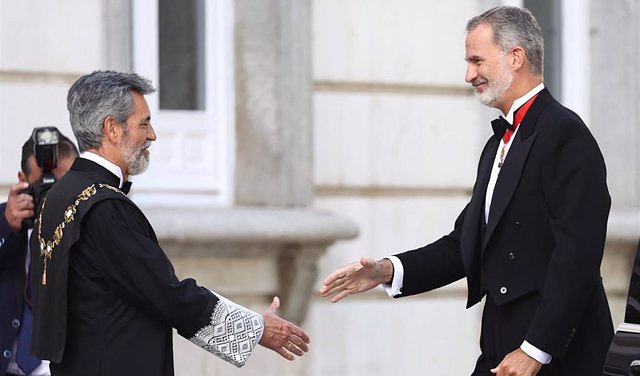 The president of the Supreme Court (TS) and the General Council of the Judiciary (CGPJ), Carlos Lesmes, plans to resign to force the renewal of the governing body of the judges, as he admitted in conversations with the press after the opening act of the court year.

The magistrate has assured that he is willing to resign but has stressed that, at the moment, it is not a decision made, but an option. He has also specified that he would not leave office until the negotiations in the Council are aimed at an agreement to appoint the two magistrates of the Constitutional Court that correspond to him.

If he resigned, he would be replaced in the CGPJ by the oldest member, who would be Rafael Mozo. In the case of the Supreme Court, the oldest magistrate, the president of the First Chamber, Francisco Marín, would assume his position.

This same Wednesday, in the framework of his opening speech of the judicial year, Lesmes ruled out the possibility of a "collective resignation" of the members and the president of the Council and reproached those who insinuate that if this was not done, a behavior "little responsible" He noted, however, that an individual resignation would be "admissible."

Lesmes has chaired the CGPJ since 2013. His mandate expired at the end of 2018, but the impossibility of the parties with greater representation in the Cortes has led him to remain in the acting position ever since.

The also president of the Supreme has insisted that if his departure occurs, it would be once the conversations between the members of the CGPJ are directed to reach a consensus on the two magistrates that the Council must appoint to the Constitutional before September 13.

Although it is not yet clear that the members will reach an agreement before the deadline set by law, he has assured that he trusts that it will not be beyond September. It is scheduled that tomorrow, Thursday, the plenary session of the Council will meet with the aim of appointing the two magistrates of the TC. Lesmes has stressed that he believes that the meeting will go "well" and will allow the rules for the negotiation to be set.

Just on Tuesday night, the most critical members insisted in a conclave that it was necessary to establish the "rules of the game", that is, to set the internal procedure to carry out these two appointments before reaching an agreement, as they pointed out to this agency sources present at the meeting.

Lesmes has also assured that once the members tell him that there is a possibility of a clear agreement, he will convene another extraordinary plenary session to address the matter.