Sergio García Dols gave up his throne after a fall and being disqualified. 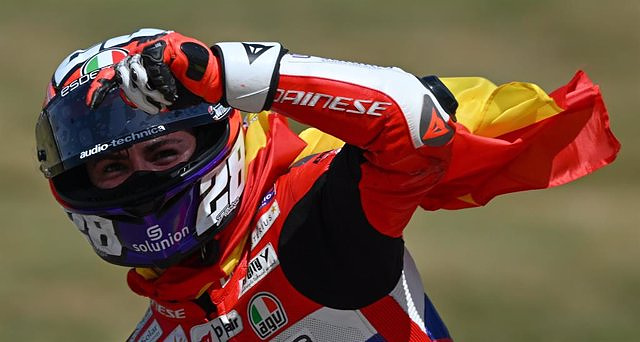 The Spanish rider Izan Guevara (GasGas) has stormed the leadership of the Moto3 category after finishing third in the San Marino Grand Prix, the fourteenth round of the Motorcycle World Championship, and the fact that the first-placed rider, Sergio García Dols, (GasGas), crashed in the first section and was later disqualified, all in a race in which the Italian Dennis Foggia (Honda) won ahead of the Spanish Jaume Masià (KTM).

On the fifth lap, García Dols suffered a crash that interrupted his comeback and sent him to the back of the pack. He got into the pitlane in case the red flag appeared, but came out on the track in the leading group with a lost lap and was disqualified.

With this, the man from Castellón says goodbye to the lead he took in Portugal and hands it over to his garage mate, Izan Guevara, who is now 11 points ahead of him. Third, 35 points behind, is Foggia, who with his third victory in Misano and his ninth victory in his life keeps alive his hopes of attacking first place in the general classification.

The Turkish Deniz Öncü (KTM), 'poleman' on Saturday, defended his privileged position at the start of the first of the races at the Misano-Marco Simoncelli Circuit, while Ayumu Sasaki ( Husqvarna) or Andrea Migno (Honda).

In just three laps, Izan Guevara (GasGas) managed to take command of the event and his teammate and until this Sunday leader of the championship, Sergio García Dols, pushed hard to come back from thirteenth to seventh place, before everything jumped for the airs

With the rider from Palma trying to open a gap, the rider from Burriana lost control of his bike and went down, an incident that ruined his desire to maintain first place overall, especially when he was forced to go through boxes to fix a problem on your machine. On lap 16, he was disqualified.

The panorama cleared for Guevara and for the Italian Dennis Foggia (Honda), who assaulted the head on lap 10 to lead the 'train' to which the Balearic himself, Dani Holgado (KTM) and Jaume Masià (KTM) were hooked and , later, Öncü and Tatsuki Suzuki (Honda).

The transalpine was managing his advantage, and despite the fact that Guevara managed to overtake him on a couple of occasions, he was always able to regain first place to see the checkered flag first. Masià, for his part, took advantage of the Balearic's courage in one of his attempts to displace him and finish second, while Öncu had to settle for fourth place.