Feijóo accuses Sánchez of "pointing" at companies and "going back to talking about rich and poor": "That is not done in the EU"

He criticizes that the Government does not help incomes of up to 40,000 euros: "It seems that above 21,000 euros all people are rich". 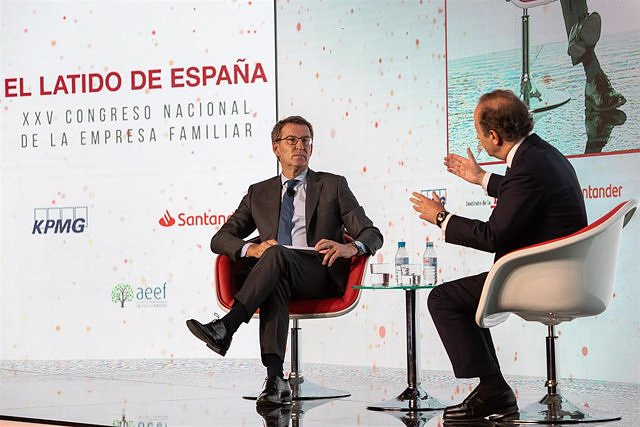 He criticizes that the Government does not help incomes of up to 40,000 euros: "It seems that above 21,000 euros all people are rich"

The president of the PP, Alberto Núñez Feijóo, has reproached the chief executive, Pedro Sánchez, on Monday for recovering "a very old message" by "returning again to talking about rich and poor", and "pointing to the companies" with "name and surnames in some cases", something that, as he stressed, "is not done in the EU". He has also criticized that his tax cut is from the year 2023 and does not reach the income threshold of up to 40,000 euros. "It seems that above 21,000 euros all people are rich," he criticized.

This is how the 25th Family Business Congress, organized by the Family Business Institute, pronounced itself in its speech in Cáceres, where it stated that what the Chief Executive has done "is not a tax reform" but rather "an increase in taxes of 3,000 million euros".

Thus, he has indicated that a fiscal reform can be downwards or upwards, but he has explained that in this case "they are going to try to raise 3,000 million more". "What is the objective? To finish off the rich or finish off the poor? The latter, not the former," she said.

He has also criticized that taxes are not lowered "on anyone" this year, "on any income", despite the complicated situation of families due to inflation and when the Government may have 32,000 million more in extra collection. For this reason, he has defended the PP's proposal to help incomes of up to 40,000 million, something that, in his opinion, is a "sensitive fiscal policy with low incomes."

"It seems that above 21,000 euros all people are rich. That does not have a pass", he emphasized, to add that on top of that it is done from the year 2023. Having said this, he reminded Pedro Sánchez that the European partners what What they are doing is "lowering taxes" and has given as an example the policy of the Prime Minister of Portugal, the socialist Antonio Costa, who has eliminated donations, successions and assets.

In his opinion, with the policy of the Government of PSOE and United Pomos, "investments are being pushed" towards countries like Portugal. According to him, he added, it is "a mistake at this time" to tell investors and assets that they are not "welcome" here. "This is irresponsibility in the midst of a crisis and a great mistake," he has proclaimed.

‹ ›
Keywords:
FeijóoPedro SánchezPPPobrezaUE
Your comment has been forwarded to the administrator for approval.×
Warning! Will constitute a criminal offense, illegal, threatening, offensive, insulting and swearing, derogatory, defamatory, vulgar, pornographic, indecent, personality rights, damaging or similar nature in the nature of all kinds of financial content, legal, criminal and administrative responsibility for the content of the sender member / members are belong.
Related News