Eric García: "That Luis Enrique trusts you, even if you don't have minutes, reinforces you" 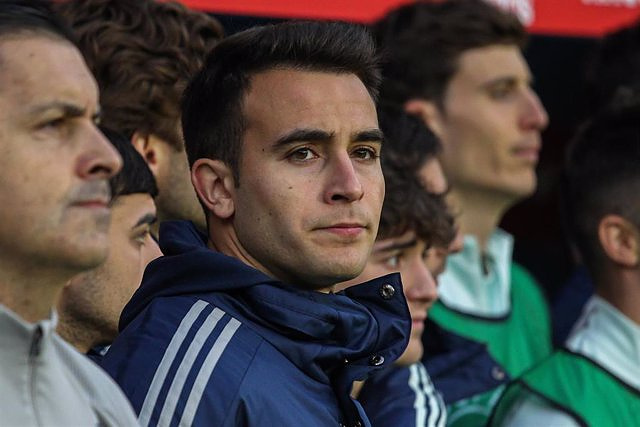 The central defender of the Spanish team, Eric García, stated that he has to be "very grateful" to Luis Enrique for the trust he has shown him, since, "even if you don't have minutes, he reinforces you and gives you confidence", at the same time that he pointed out that the criticism does not affect him, but they did surprise him "at first".

"All the footballers want to play and that the coach trusts you, even if you don't have minutes, it reinforces you and gives you confidence, but you have to give your best, because the coach gives you a lot of confidence and you have to give it back", expressed the Barça defender at a press conference from the Ciudad del Fútbol in Las Rozas.

Thus, García was "very grateful" to the Asturian coach "for the trust" he has shown him "from the beginning." "I'm sure it wasn't easy for him, but as a player you feel grateful and confident. The things he asks of me here are very similar to Barça. Every time I enter the field, I return the confidence he has given me," he said. as one of its premises in the national team.

The defender was summoned for the first time by Luis Enrique in August 2020, when he barely had minutes at Guardiola's Manchester City and a year before his signing for Barça. At that time, he was the target of "criticism", although he acknowledged that they did not "affect" him. "Unfortunately, last season I had to get used to them at the beginning. It surprises you a bit, but then you understand what this is about, that you have to be focused on yourself, listen to those around you, to your coaches" he explained.

"Sometimes, unfortunately, we have to get used to criticism. I think that Ferran Torres has shown what a good footballer he is, his career indicates it, his numbers in the national team are spectacular, I have no doubts, sometimes the ball He doesn't want to go in. But things end up coming by themselves when you work," he warned about the moment of Ferran Torres, who also repeats on the Asturian's list.

García also valued the possible signing of Marco Asensio, who ends his contract with Real Madrid next summer, for the Barça club. "Asensio is a great footballer, he has a contract with Real Madrid and I can't tell you more. It's a pleasure to enjoy him in the national team. If we had to laugh at all the rumours, we wouldn't stop, they are things that come out and stay there" , he pointed out, to later throw the same argument about the Real Sociedad player Martín Zubimendi. "You have to be careful with comparisons, Busquets is the best midfielder I've ever seen, Zubimendl is starting, he surprised me at the Games, but he's a Real player," he added.

Protagonist of the play in the 2021 League of Nations final, in the play of Kylian Mbappé's goal and his correct position, despite the fact that the rule was changed after said set of the game that García experienced in the first person. "It was obvious that it was offside, the other day they told us that they had changed it, a little late, a title 'screwed' us, at least they have rectified it," he lamented.

Eric García, a starter in five games for Barça this season, highlighted the competition between the Barça centre-backs. "This year there are five central defenders of the highest level. It's a good thing, at Barça and the national team, it's very important, it makes you more connected in each training session, because everything is like an exam", he stated, before highlighting the "qualities" of Gerard Pique. "He's among the two-three best centre-backs in history that I've seen," he added.

Finally, he commented on how it is to train with the system of 'walkies' and loudspeakers that Luis Enrique used in the first sessions this week. "It is useful for the mister to correct, since he sees the training from the scaffolding. In this way, it is something more effective and innovative. Technology advances and in football it is being implemented more and more every day. They are effective things, you listen very well to what what he says and corrects", he deepened.

In an act prior to the official press conference, for the official presentation of the Panini World Cup sticker collection, García hoped that "hopefully the success that there was with the stickers in 2010 can be repeated because that will mean that in the field of game there will also be that success", for which he is "very much looking forward to it".

Another card that will be his rival is Robert Lewandowski, of whom he highlights that "he is a star in Poland, he is the most important player and he is showing how good he is at Barça." "If there has to be a confrontation against Poland in the World Cup, don't have the day," he added.

Eric García also spoke about Sergio Ramos, a subject in which he did not want to get wet. "From here to the World Cup there is still a month and a half, many things can happen, defenses, midfielders, forwards and goalkeepers can enter," he settled.