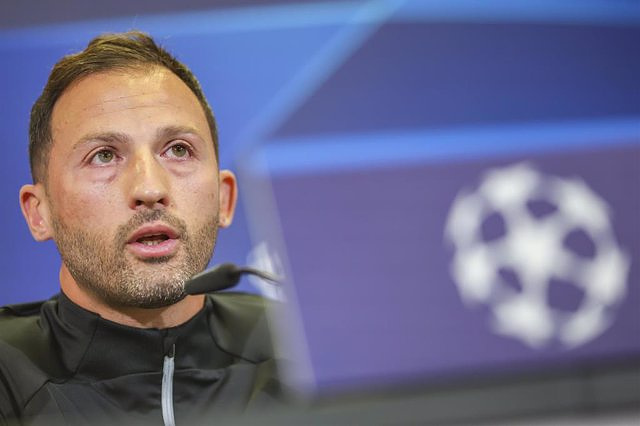 The Italian Domenico Tedesco has been dismissed as coach of RB Leipzig this Wednesday, after the German team's opening defeat in the Champions League by 1-4 against Shakhtar Donetsk, as reported by the club in a statement.

In addition, Andreas Hinkel and Max Urwantschky, Tedesco's assistants on the Leipzig bench, were dismissed. The German team will provide "timely information" about who will be his substitute.

"The decision to release Domenico Tedesco was very difficult for us. We played a very successful second half of the season with Domenico last season and we qualified for the Champions League. In addition, we won our first major title, the Cup, and so we played the most successful season in the history of our young club," explained club chief executive Oliver Mintzlaff.

Mintzlaff showed "great gratitude" to the Italian in statements published by Leipzig, assuring that he is "an excellent coach who will surely continue to be successful." "However, after starting the season in the Bundesliga with five points from five games, especially after the most recent games against Eintracht and at home against Shakhtar Donetsk, we lacked the conviction that an immediate change could happen." he analyzed.

"We want to achieve our goals. Therefore, in the general evaluation, we came to the conclusion that we need a new impetus. We are sorry that we are now parting ways and we want to expressly thank Tedesco and his team for the work they have done. We wish Domenico all the best for his sporting and personal future", concluded the executive director.

Domenico Tedesco took over as Leipzig manager on 9 December 2022, when the team was 11th in the table, seven points below the Champions League places. The Italian managed to channel the situation, adding in that second part of the course 36 points and 42 goals in favor, reaching fourth place.

In addition, Leipzig reached the semifinals against Glasgow Rangers in the Europa League and reached the final of the DFB Cup, which the team would end up lifting against Freiburg. Thus, Tedesco's balance as coach of Leipzig is 21 wins, 8 draws and 9 losses in 38 games directing the German club's bench, with 88 goals for and 48 goals against.

After that tough defeat in the Champions League, Leipzig will live against Real Madrid, next Wednesday and at the Santiago Bernabéu, their next European commitment, in which it will be the next big challenge for the new coaching staff.

‹ ›
Keywords:
Champions LeagueItalia
Your comment has been forwarded to the administrator for approval.×
Warning! Will constitute a criminal offense, illegal, threatening, offensive, insulting and swearing, derogatory, defamatory, vulgar, pornographic, indecent, personality rights, damaging or similar nature in the nature of all kinds of financial content, legal, criminal and administrative responsibility for the content of the sender member / members are belong.
Related News