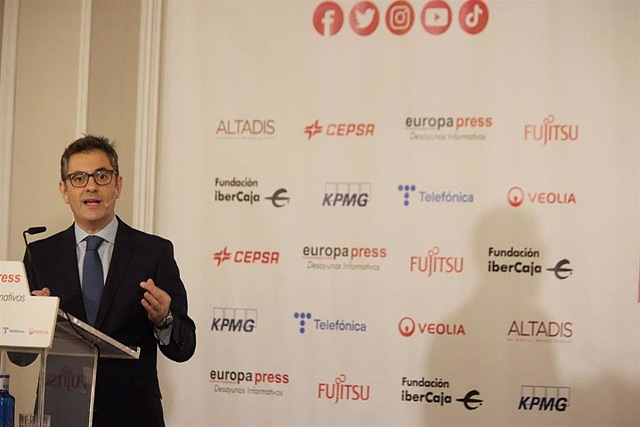 The Minister of the Presidency, Félix Bolaños, has assured today that it is a possibility to outlaw the Franco Foundation if it exalts the dictator as its statutes say and announces an upcoming agreement with the family to exhume the remains of Primo de Rivera from the Valley of the Fallen.

The head of the Presidency has made these statements during his speech at the Europa Press Information Breakfasts where he has not ruled out that the Franco Foundation could be made illegal in application of the Democratic Memory Law: "It is a possibility to make it illegal." Bolaños has defended this rule, noting that it is beginning to be implemented and has defended it, understanding that in Spain there was an "anomaly" until it was approved.

It is, as he has said, a "democratic quality leap", although he believes that it has come too late because there are fewer and fewer victims of the dictatorship and repression. But he has highlighted the fact that their children and grandchildren can recover the remains and give a "dignified burial."

And among the tasks that lie ahead in the application of the new standard, he explained that there is the Franco Foundation. "If this foundation, which has its statutes, what it does is exalt a dictator, the law will have to be applied and it will have the corresponding consequences," he asserted.

Regarding the exhumation of the remains of José Antonio Primo de Rivera del Valle de los Caídos, he explained that the Government is in "very advanced conversations with the family" and hopes that these conversations will have results "very soon".

However, he did not want to go further, claiming that the family has requested discretion and will respect him. "I hope that very soon we will be able to make an announcement hand in hand with the family itself", he has stressed.

‹ ›
Keywords:
Valle De Los CaídosFélix Bolaños
Your comment has been forwarded to the administrator for approval.×
Warning! Will constitute a criminal offense, illegal, threatening, offensive, insulting and swearing, derogatory, defamatory, vulgar, pornographic, indecent, personality rights, damaging or similar nature in the nature of all kinds of financial content, legal, criminal and administrative responsibility for the content of the sender member / members are belong.
Related News