Bolaños asks for "temporary sacrifices" from energy companies and banks: "The Government is not going to let the usual ones pay"

Ensures that Spain "does not run risks" of gas cuts by having "good storage". 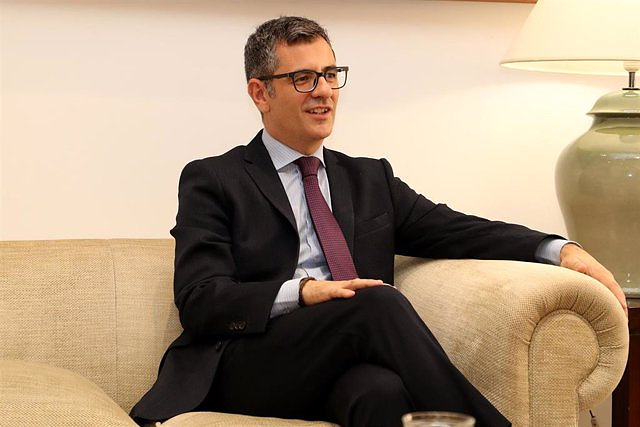 The Minister of the Presidency, Relations with the Courts and Democratic Memory, Félix Bolaños, has stated that the Government is going to ask for "temporary sacrifices from those who have the most", such as banks, gas, electricity and oil companies, to cope with the current crisis .

Bolaños has indicated that this is "useful policy" and has added that, in 2012 and with the PP government, "with everyone's money the banks were helped" and that now "with the money from the banks and energy companies will help everyone".

"This government is not going to let the usual pay, as in the previous crisis," he said in an interview in the Balearic newspaper 'Última Hora' collected by Europa Press.

Bolaños has assured that Spain "does not run the risk of gas cuts" and that it is prepared for next winter, since the country has "good gas storage".

This is what he has done in which he added that the Government is working on a Contingency Plan to promote energy saving and efficiency, but that Spain starts from "a situation of advantage with respect to other countries" with greater dependence on Russian gas, since it has "diversified supplies and key infrastructures"

Likewise, he has highlighted the free medium and short distance transport measures and the 20 cent fuel subsidy, in addition to the 'Iberian exception' to lower fuel prices.

However, he has said that he wants the war to end "as soon as possible" because of the Ukrainians themselves, who have been "invaded and attacked", and because it would be good for the global economy.

On the other hand, Bolaños has been asked if the arrival of Alberto Núñez Feijóo to the presidency of the PP has helped to relax tensions, but he has replied that "unfortunately it has not been like that and he has already given examples of it, lying to the Spaniards on unemployment data, on the risk premium, on the memory law and even on the reasons for not renewing the General Council of the Judiciary and the Constitutional Court".

In addition, he has stressed that the PP has been "breaking the law and the Constitution on a daily basis" for three years, but has shown his surprise that Feijóo "has already begun to vary the excuses and even break the agreements signed with his predecessors to renew the judicial bodies and also mislead about the motives".

‹ ›
Keywords:
Félix Bolaños
Your comment has been forwarded to the administrator for approval.×
Warning! Will constitute a criminal offense, illegal, threatening, offensive, insulting and swearing, derogatory, defamatory, vulgar, pornographic, indecent, personality rights, damaging or similar nature in the nature of all kinds of financial content, legal, criminal and administrative responsibility for the content of the sender member / members are belong.
Related News