Blinken arrives in kyiv to show support for Ukraine 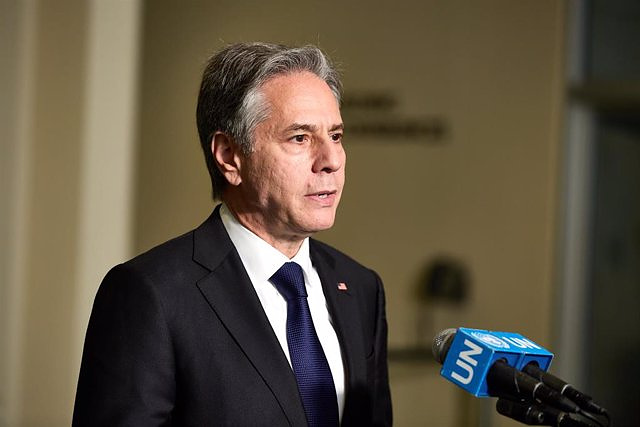 The Secretary of State of the United States, Antony Blinken, has arrived in kyiv on a surprise visit to show his support for the Ukrainian authorities and talk about the new military aid package, valued at 675 million euros, announced this Thursday by the Administration by Joe Biden.

A senior State Department official has pointed out that this visit by Blinken, the third since the Russian invasion of Ukraine began on February 24, is scheduled at an "important moment" for the country, which recently celebrated the Day of Independence, according to Bloomberg.

The US Secretary of State is scheduled to meet with senior Ukrainian officials, although at the moment it is unknown if he plans to hold a meeting with President Volodimir Zelenski, as reported by the CNN network.

This trip comes after the US Secretary of Defense, Lloyd Austin, in the framework of a meeting at the level of defense ministers at the Ramstein air base in Germany, announced on Thursday an additional package to deliver weapons to Ukraine worth 675 million euros.

‹ ›
Keywords:
Estados UnidosUcraniaJoe Biden
Your comment has been forwarded to the administrator for approval.×
Warning! Will constitute a criminal offense, illegal, threatening, offensive, insulting and swearing, derogatory, defamatory, vulgar, pornographic, indecent, personality rights, damaging or similar nature in the nature of all kinds of financial content, legal, criminal and administrative responsibility for the content of the sender member / members are belong.
Related News