Bendodo warns, on the dialogue table, that "the blackmailer is never satisfied" and it would be a "mistake" to give more to the Government

Remember the meeting that Sánchez has on Thursday with three other presidents of the PP and asks for the same treatment for all the CCAA. 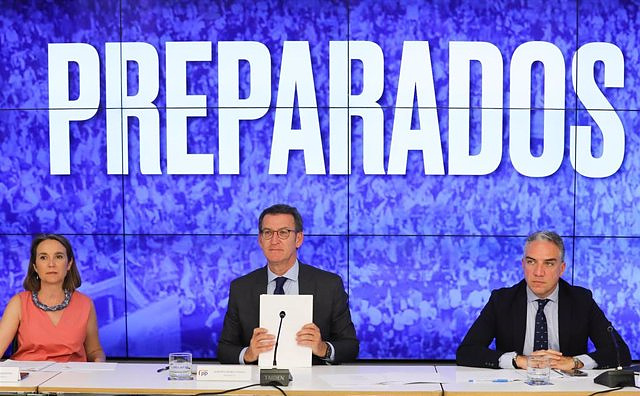 The general coordinator of the PP, Elías Bendodo, warned this Wednesday in relation to the dialogue table meeting between the central government and the Generalitat of Catalonia that "the blackmailer is never satisfied with the first payment" and, therefore, " yielding more" to the Catalan government would be "a big mistake".

This has been pronounced before the new meeting of the dialogue table held in the offices of the Ministry of the Presidency, located in the La Moncloa complex, the Government and the Generalitat, as agreed this month by Pedro Sánchez and Pere Aragonès. Four ministers and four ERC councilors will sit at the table.

In an interview in RNE, which Europa Press has picked up, Bendodo has alluded to the meeting that the chief executive, Pedro Sánchez, will hold on Thursday in Moncloa with three regional presidents of the PP (Juanma Moreno, Alfonso Rueda and Alfonso Fernández Mañueco) and He has stressed that the Government must treat all the territories equally and not be guided by "political interests or parliamentary arithmetic", "rewarding" some communities over others.

In this sense, Bendodo has indicated that he expects "exactly the same" from this Wednesday's meeting as from the meeting that will take place on Thursday with other regional presidents. Moreover, he has indicated that he trusts that the second will not be an "alibi" for "new concessions to Catalonia".

"The blackmailer is never satisfied with the first payment. Therefore, giving in more to the Catalan independence movement, to the Government of Catalonia, would be a big mistake. And from the PP we are going to be very vigilant," warned the 'popular' leader, who believes that it is not possible to continue "whitening independence" from the Executive of Spain.

That said, Bendodo has affirmed that the priorities of the Sánchez Executive do not coincide with those of the Spaniards nor those of the Generalitat with those of the Catalans, for which he has advocated not continuing to abound in debates that "in the end are not of interest to Catalan society".

When asked about the shielding of Catalan promoted by the Generalitat, Bendodo pointed out that Spain is a land rich in many languages ​​and none can be "exclusive". In his opinion, the approach is "wrong from the base".

"The more languages ​​the better, the more enriching, but without vetoing others. It is just as important that Catalan children know Catalan, know Spanish or know English. That is the priority, having young people who can compete in international markets in the future", has emphasized.