The director of the Danish federation describes Infantino's words as "shameful" 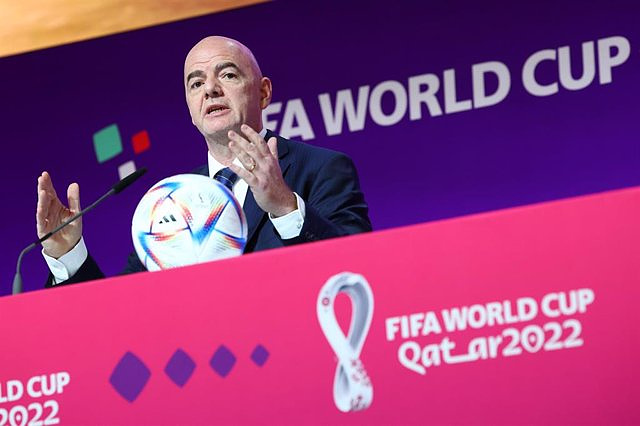 The football director of the Danish Football Association, Peter Möller, strongly criticized the statements by FIFA president, Gianni Infantino, during his pre-World Cup press conference, in which he described Western countries as "hypocritical".

"When I saw the FIFA president yesterday I was shocked. And at that moment I was also ashamed to be part of this tournament. His words were shameful. This is the man who shapes the image of football and who should show what he football can do," Möller told dpa on Sunday.

At Saturday's press conference, Infantino called Western countries "hypocritical." The president spoke for nearly an hour, defending the tournament and Qatar, a country that has been heavily criticized for its human rights conditions, the deaths of migrant workers building stadiums and its treatment of LGBTQ people.

Möller assured that FIFA does not have a serious interest in a debate on the conditions in Qatar and that after his experience with this World Cup, he is "a little worried about the future of the federation and football in general", since every time more fans are turning away from the sport.

Nor does the former player believe that hosting the World Cup in Qatar will make a lasting difference to the human and labor rights situation in the country. "Do you think the World Cup has improved things in Brazil? Do you think they have improved a bit in South Africa? Let's see what happens in Qatar when the spotlight is no longer on this country. I'm not convinced," he concluded.

‹ ›
Keywords:
Fifa
Your comment has been forwarded to the administrator for approval.×
Warning! Will constitute a criminal offense, illegal, threatening, offensive, insulting and swearing, derogatory, defamatory, vulgar, pornographic, indecent, personality rights, damaging or similar nature in the nature of all kinds of financial content, legal, criminal and administrative responsibility for the content of the sender member / members are belong.
Related News