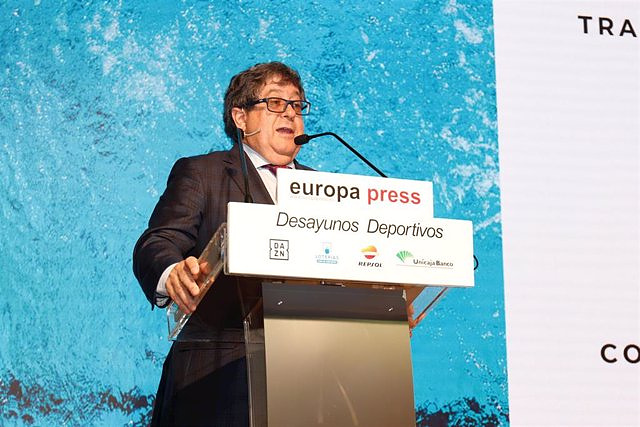 Rafael Caballero Sánchez will chair the Sanctioning Committee of the Spanish Commission for the Fight against Doping in Sport, the newly created body that will assume the resolution of sanctioning procedures and which will be made up of six other members "with full independence".

This was confirmed by José Luis Terreros, director of CELAD, at the Europa Press Sports Breakfasts, sponsored by Repsol, State Lotteries and Betting, DAZN and Unicaja Banco, where he indicated that this body will be made up "of seven professionals with knowledge profiles diverse, with professionals linked to law, science and medicine, and the sports field, as required by international regulations".

"This committee will carry out its functions with full independence, not being able to receive orders or instructions from any other body or authority, its sanctioning resolutions will have a special appeal before the same committee and finally they will be immediately executive, they will put an end to the administrative process and may be appealed. subsequently before the contentious-administrative jurisdiction," he explained.

The mandate will be of four years, being able to be re-elected only one more time, in a renewal that will be done "partially every two years". Leading all of them will be Rafael Caballero Sánchez, Professor of Administrative Law at the Complutense University of Madrid and elected "unanimously by the rest of the members". In addition, he has developed research activities in the field of food safety and sanctioning law.

Terreros was "sure" that they have "the best possible committee", since it is made up of "four jurists of highly recognized prestige and three experts in toxicology of international level". "They take away a great responsibility from me and I expect more justice and rigor than has been the case up to now in the sanctions and with complete independence. If they have to give us a smack, let them give it to us," he warned.

In addition, the entry of the new legislation causes other modifications in the organizational structure such as the Madrid Doping Control Laboratory, until now within the CELAD structure, now depends "on an independent organization from the sports field" such as the Carlos III Health Institute, in the Ministry of Science and Innovation, and "thus comply with the International Standard for Laboratories".

"In my point of view, the Madrid Laboratory thus obtains not only complete independence from the sports field, but also a historic opportunity to increase its commitment to scientific research", highlighted the director of CELAD, who also positively assessed that the "Department of Sports and Health and its powers once again depend directly on the CSD, from which it should never have left".