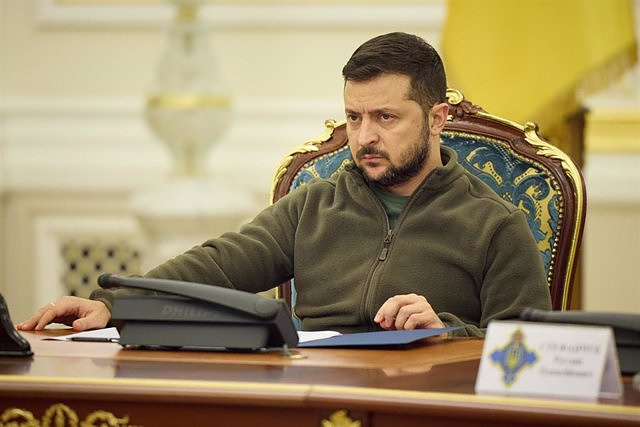 The President of Ukraine, Volodimir Zelenski, stressed this Monday that the country "will overcome everything" and "survive" until it can celebrate "Victory Day" in kyiv and Ukraine "at peace", in the midst of the military offensive triggered by Russia on February 24.

Zelenski has given a speech on the occasion of the Day of Dignity and Freedom in which he has stressed that the Russian invasion has changed "many things", both in Ukraine and "in Europe and the rest of the world". "Something unchanged, which is the answer to the question about what are Ukrainians and what is important to us."

"Those things are dignity and freedom," he said. "We have always valued them and we are not afraid to stand up for them. We have always known what we wanted and this year the whole world has realized what we are capable of. Friends and enemies have seen it. Allies and partners. Us We have seen it ourselves", he praised.

Along these lines, the Ukrainian president also stressed that "everyone has seen what Ukrainian civilians are capable of". "How to become a living wall in the path of the occupier's military columns (...), go to demonstrations under the occupation despite the shots and stun grenades," he explained.

"We are willing to give everything we have so that the Ukrainian warrior looks decent, fights decently and wins decently," he said, before giving the example of "a famous model who cooks for warriors and combatants " and "a television presenter who prepares a 'Bandera milkshake'", in reference to Stepan Bandera.

Bandera is considered an icon by Svoboda and the Right Front, with fascist and racist overtones, who defend that he was a nationalist figure, after asking the population in 1941 to "help" the Army of Nazi Germany "to overthrow Moscow and the Bolshevism".

"We can be without money, without gasoline, without hot water, without electricity, but not without freedom. That does not change. We have paid and continue to pay a very high price for freedom and we will never forget those who gave their lives for Ukraine. Never We will forget those who took their lives and wanted to take away our freedom, but the main thing is that nobody has succeeded and nobody will," he added.

On the other hand, the General Staff of the Ukrainian Army has indicated this Monday that 390 Russian soldiers have died in combat during the last day, which brings the total number since the beginning of the invasion to "around 84,600".

Thus, the Ukrainian Armed Forces have pointed out that 2,892 battle tanks, 1,870 artillery systems, 209 anti-aircraft systems and 5,822 self-propelled and armored multiple rocket launchers have also been destroyed.

In addition, they have stated that 278 planes, 261 helicopters, 1,537 drones, 480 cruise missiles, 16 boats, 4,378 vehicles and fuel tanks, and 161 pieces of special equipment have also been destroyed. "The data is being updated. Hit the occupier. Let's win together. Our strength is in the truth," the General Staff of the Ukrainian Army concluded in a message posted on its Facebook social network account.