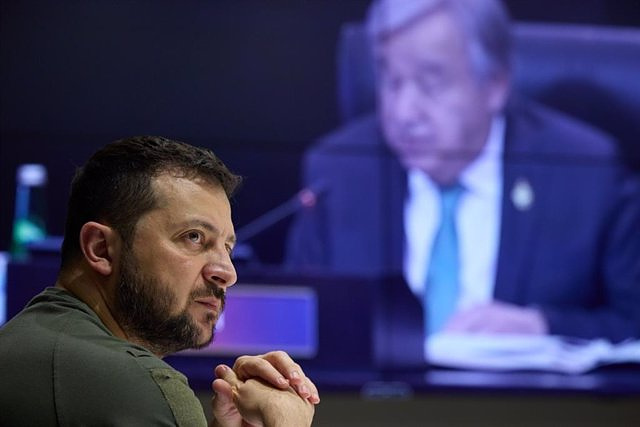 The Ukrainian president, Volodimir Zelenski, has made an appeal this Tuesday before the G20 summit for the States to help restore peace in Ukraine and to put an end to "Russia's war".

"I am convinced that right now it is necessary and possible to stop Russia's destructive war. We will not allow the Russian Army to rest, rebuild its forces and then start a new series of terror and global destabilization," the Ukrainian president said, according to a statement from the Ukrainian Presidency.

For this reason, he recalled that each day of delay means "new deaths of Ukrainians, new threats to the world and an insane increase in losses" due to the continuation of "Russian aggression, losses for everyone in the world".

In this sense, he has challenged Russia to show that it wants to "really" end the war, something that, according to the Ukrainian head of state, it must demonstrate with facts for the international community to corroborate.

"Apparently, no one can trust the Russian words, and there will be no more Minsk protocols, which Russia would violate immediately after signing," he said during his speech at the G20.

Likewise, Zelensky has listed a series of "concrete actions" that could be implemented to help Ukraine and other countries in the face of possible conflicts in the future.

Among the measures are an agreement to ensure nuclear and radiation safety, all after Russia "blackmailed the world with a nuclear disaster," according to Zelensky.

The second proposal encompasses the ability of countries to ensure a good food situation in the world, while the third refers to energy security, diminished after almost ten months of war in Ukraine.

"The fourth proposal is the release of all prisoners and deportees (...). The fifth, the implementation of the UN Charter and the restoration of the territorial integrity of Ukraine and the world order," added the Ukrainian president.

To reach peace, Zelensky has pointed to the withdrawal of Russian troops from Ukrainian territory and the cessation of hostilities, as well as a justice process by which war criminals are judged.

Among other measures, the President of Ukraine has listed the protection of the environment in wars, the prevention of the escalation of the conflict as well as a signed confirmation of the end of the war.

"I have outlined the directions by which each of you can choose for yourself how to become a co-creator of peace," Zelensky stressed, assuring that his proposals can save thousands of lives and will mean the "restoration of the force of International Law ".

"Peace is a global value. What is important for each person on earth (...). And if Russia opposes our peace formula, you will see that it only wants war," he stressed.