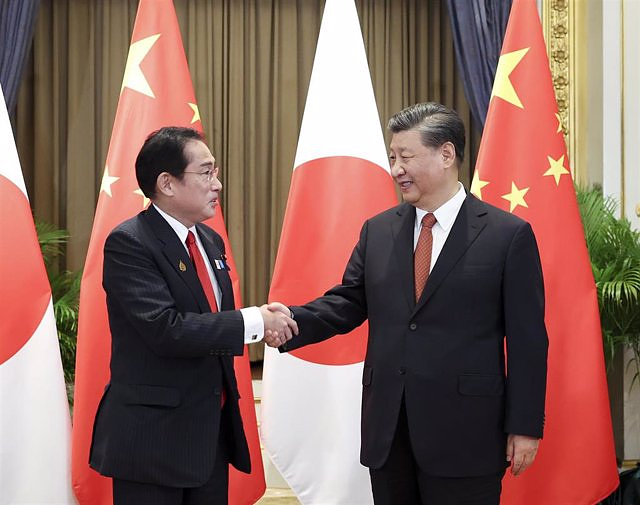 "We agreed to communicate closely at various levels, including at the leadership level," Kishida acknowledged after a 45-minute meeting on the sidelines of the Asia-Pacific Economic Cooperation summit in Bangkok.

"Today's meeting has been a good start for a dialogue towards a constructive and stable relationship between Japan and China," said the Japanese prime minister, as reported by the Kiodo agency.

Xi has pointed out that Beijing and Tokyo share many common interests, as well as a space for cooperation. He, too, has expressed his hope that countries can build relationships that "meet the requirements of the new era."

"China and Japan are close neighbors of each other, and both are important countries in Asia and the world, sharing many common interests and space for cooperation. (...) China is willing to work with Japan to grasp the general direction of bilateral relations from a strategic perspective and build a China-Japan relationship that meets the requirements of the new era," reports the Xinhua news agency.

Along these lines, the Chinese president has emphasized that both parties must treat each other "with sincerity and mutual trust" in order to "be cooperative partners with each other and not pose threats to each other."

Japan's prime minister has announced that he has agreed to boost security communications, resume defense contacts between the countries and coordinate a visit to China by the foreign minister.

Kishida also conveyed to Xi Japan's "serious concern" about the tensions in the Senkaku Islands and the launch of ballistic missiles near Taiwan, which fell in the Japanese Exclusive Economic Zone (EEZ) in August.

Both leaders have held telephone conversations in the past after Kishida was elected prime minister of Japan, according to information from the newspaper 'The Japan Times'. Xi had previously met the late Prime Minister Shinzo Abe in December 2019.

Last September, China and Japan marked 50 years of diplomatic relations, although relations have generally been overshadowed by tensions over territorial disputes between the two.

‹ ›
Keywords:
ChinaJapón
Your comment has been forwarded to the administrator for approval.×
Warning! Will constitute a criminal offense, illegal, threatening, offensive, insulting and swearing, derogatory, defamatory, vulgar, pornographic, indecent, personality rights, damaging or similar nature in the nature of all kinds of financial content, legal, criminal and administrative responsibility for the content of the sender member / members are belong.
Related News