The hitherto president of the United States House of Representatives, Nancy Pelosi, announced this Thursday her resignation from the leadership of the Democratic Party in the lower house, just a few hours after the victory of the Republicans was certified. 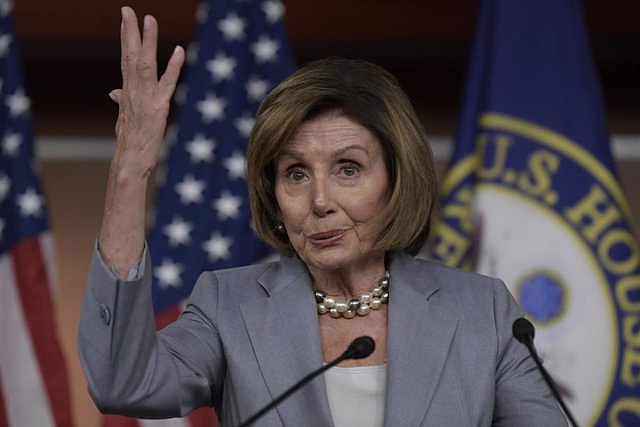 The hitherto president of the United States House of Representatives, Nancy Pelosi, announced this Thursday her resignation from the leadership of the Democratic Party in the lower house, just a few hours after the victory of the Republicans was certified.

In statements from the lower house room, Pelosi has confirmed that she will continue as a congresswoman "speaking for the people of San Francisco," but will not present her candidacy for reelection of the Democratic leadership, according to CNN.

"I will not seek re-election to the Democratic leadership in the next congress (...) For me, the time has come for a new generation to lead the Democratic 'caucus' that I respect so much," said the senior leader of the Democratic Party.

At this point, she has been "grateful" for the willingness of many to take a step forward in what is already considered the beginning of a stage of cleaning up and renewing the party's leadership to adapt to the new challenges of politics. US internal.

In fact, the US media have pointed to New York Rep. Hakeem Jeffries as one of the Democratic figures who has apparently stepped forward to replace Pelosi. Jeffries stands out for having once opposed the most progressive wing of the Party, led by Representative Alexandria Ocasio-Cortez.

Pelosi, 82, and leader of the party in the House of Representatives since 2003, has looked back on her first visit to the Capitol and has wistfully acknowledged that at that time, she never, ever thought that she could go from being "love from home to president of the House".

Pelosi's resignation comes after the Republican Party wrested control of the House of Representatives from the Democrats -- but not the Senate -- after the results of the midterm elections were certified, held ten days ago.

The Democratic leader and for the moment president of the House already reported several days ago that she would make a decision about her future after the electoral appointment and also taking into account the tragic event in which her husband, Paul, was the protagonist at the end of October.

Paul Pelosi was surprised on October 28 at his private home in San Francisco by an assailant who, hammer in hand, shouted asking where Pelosi was, at that time in Washington. After verifying that the political representative was not at his home, he struck Paul Pelosi several times on the head.

This episode was soon denounced by a large part of the American political class, although there were also those who tried to orchestrate a plot, including former president Donald Trump, insinuating that Paul's assailant could actually be a lover.

In this regard, Pelosi has elevated her husband as a fundamental "pillar of support" in her life, and has stated that the family is grateful for the expressions of affection received while Paul advances in his recovery. The House of Representatives has responded to these words by standing up to applaud.

Moments after Pelosi's statements, the White House has released a statement in which the President of the United States, Joe Biden, recognizes the "historic mandate" of what he considers to be "the most important speaker of the House of Representatives in the history".

"Because of Nancy Pelosi, the lives of millions and millions of Americans are better, even in districts represented by Republicans who voted against her bills and too often vilify her," Biden said.

Finally, the president has indicated that even if Pelosi resigns from the Democratic leadership in the lower house, he will never stop protecting the "sacred democracy" of a country that, he says, owes "a deep debt of gratitude" to her for "her service, her patriotism and, above all, their absolute dignity".

On January 6, 2021, when a mob of Trump supporters stormed the United States Congress, Pelosi and Senate Majority Leader Chuck Schumer tried to stop the assault from within.

During almost four hours of growing tension, both warned of the danger that the situation posed to the staff and officials inside the building, while pointing to the outgoing president as the main "instigator."

Pelosi herself later promoted the opening of a parliamentary investigation to clarify what happened that day, when Trump himself advocated blocking the ratification of the presidential votes that gave Biden victory.

Pelosi's activities rose to prominence again in September following her controversial visit to Taiwan with a delegation of senior US officials, an issue that sparked harsh criticism from the Chinese government.

The Democratic politician has defended the trip tooth and nail and has accused the president of the Asian giant, Xi Jinping, of acting like a "scared thug" in what has ultimately been his last official act as leader of the House of Representatives. from United States.

In what was the first visit in 25 years by a speaker of the US House of Representatives to the island, Pelosi took the opportunity to assure the Taiwanese authorities that Washington "will not abandon them" despite the fact that China has increased its military deployment in the immediate vicinity. .