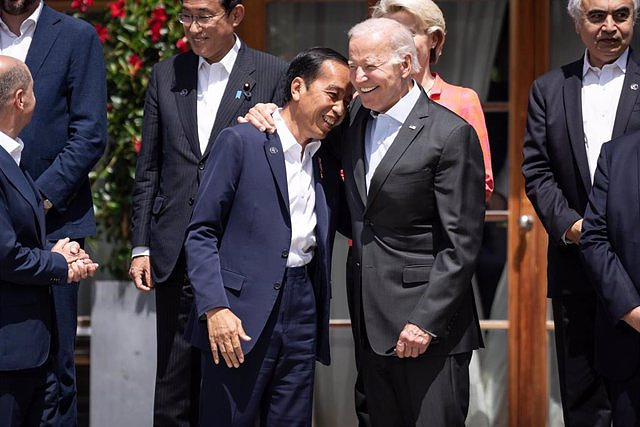 The US president, Joe Biden, met this Monday with his Indonesian counterpart, Joko Widodo, in Bali, where he expressed his support for the Asian country before the G20 Presidency, while announcing bilateral cooperation on energy and health.

Biden has congratulated Indonesia for the success --and the Presidency-- of the G20, while he has expressed his support "for the leadership" of the country in the Indo-Pacific, a country he has called "as the third largest democracy in the world ".

The US president has also singled out Jakarta as "a strong supporter of the rules-based international order." "Indonesia is a critical partner and a great democracy," Biden added in statements to the press, according to a White House statement.

Both leaders have discussed ways to strengthen the Strategic Partnership between the two countries, as well as Widodo's next ASEAN presidency in 2023.

On his agenda, he highlights the association on clean energy and the fight against pandemics. "Tomorrow we will introduce a new transformative partnership to support Indonesia's clean energy," the US leader announced.

"Together we seek a better future. We have finalized a new partnership through the Millennium Challenge Corporation to invest almost 700 million dollars (a similar figure in euros) in the development of high-quality transport infrastructure here in Indonesia", explained Biden. .

‹ ›
Keywords:
Estados UnidosIndonesiaBaliJoe Biden
Your comment has been forwarded to the administrator for approval.×
Warning! Will constitute a criminal offense, illegal, threatening, offensive, insulting and swearing, derogatory, defamatory, vulgar, pornographic, indecent, personality rights, damaging or similar nature in the nature of all kinds of financial content, legal, criminal and administrative responsibility for the content of the sender member / members are belong.
Related News