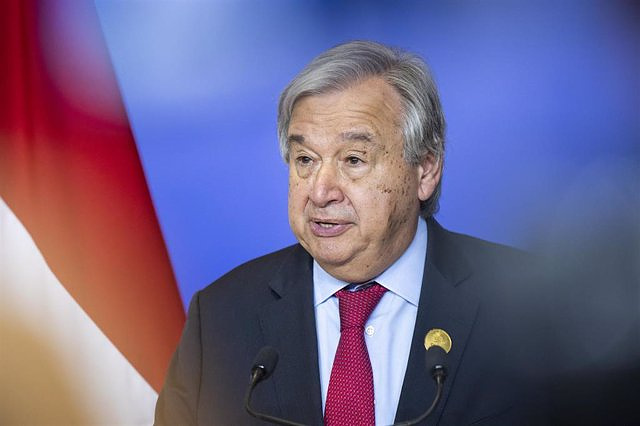 The UN Secretary General, António Guterres, has pointed out that cutting greenhouse gas emissions remains a pending task, given that despite the United Nations climate summit held in Sharm el, they must be reduced "drastically now". Shaykh has not addressed this issue.

"Let's be clear. Our planet is still in the emergency room. We need to slash emissions now, and this is a problem this COP did not address. A fund for loss and damage is essential, but it is not an answer if the climate crisis wipe a small island state off the map or turn an entire African country into a desert", he warned at the closing session.

In this sense, he pointed out that the 1.5th is the "red line that we must not cross" and that in order to maintain this objective it is necessary to invest "massively" in renewable energies and end "our addiction to fossil fuels". "The world still needs a big leap in climate ambition," she has defended.

For this reason, he has emphasized the need for countries to reach an international pact of solidarity, in which everyone makes an "extra effort" to reduce emissions in this decade" to achieve the temperature target set. "We must avoid a fight energy in which developing countries finish last, as they did in the race for vaccines against COVID-19," he reproached.

In his speech, Guterres has referred to the "biblical proportions of the climate crisis". "The signs are everywhere. Instead of a burning bush, we are facing a fiery planet", he has maintained.

"COP27 concludes with much homework and little time. We are already halfway between the Paris Climate Agreement and the 2030 deadline. We need all hands on deck to drive justice and ambition forward. This also includes ambition to put an end to the suicidal war against nature that is fueling the climate crisis, driving species to extinction and destroying ecosystems," he recalled.

"The world's most vital source of energy is the power of people. This is why it is so important to understand the human rights dimension of climate action."

In addition, it has targeted young climate activists around the world who "have kept the agenda moving through the darkest days." "They must be protected. I tell all of them that we share their frustration," she admitted.