The judge says that they "exercised their rights of assembly and demonstration" against a political rival. 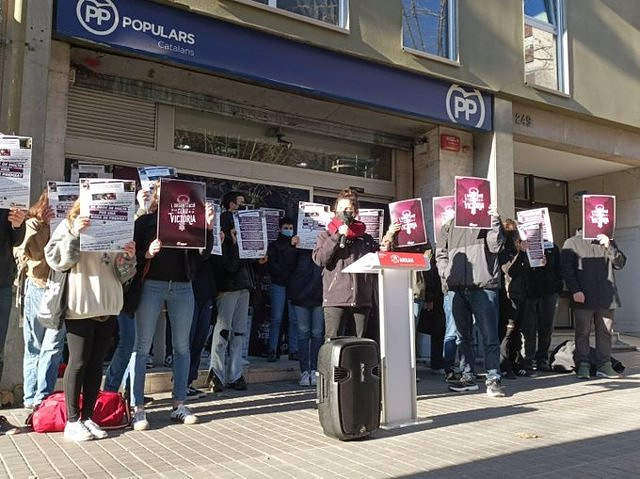 The Criminal Court 17 of Barcelona has acquitted the six militants from Arran whom it judged accused of alleged public disorder, violation of premises and damage during a protest at the headquarters of the PP in Barcelona in 2017, as stated in the sentence consulted by Europe Press this Wednesday.

In the trial on November 9, the six denied that they had blocked access to the headquarters and that they prevented entry or exit from the building, and the Prosecutor's Office requested a fine of 5,400 euros for them, which the acquittal of the court ruled out. .

The ruling considers it proven that one of the defendants did gain access to the headquarters and that the protesters remained in the lobby of the premises "for about 20 minutes, making it difficult for people to enter and exit normally and hanging various stickers on the walls of the premises and painting with spray a flag", as the recordings of the security cameras show.

However, the judge considers that the proven facts do not leave "duly fulfilled" the requirements to consider it a crime, and highlights that the occupation of the lobby of the headquarters lasted only a few minutes.

It also rules out that there was a significant disturbance of public peace, as required by the criminal type of disorder, and recalls that "the exercise of fundamental rights is not neutral and that inconvenience and inconvenience may arise from it for those affected, in the event , workers, sympathizers, militants and anyone who was related or wanted to be related to the PP" during the time the protest lasted.

He points out that "the demonstrators exercised their rights to assemble and demonstrate precisely against the actions of a political rival" and points out that there was no violence or altercations between people even though there was material damage, which he describes as scant.

"The difficulties in entering or leaving were due more to the complete physical occupation of a small space than to specific avoidance maneuvers," adding that the protesters left voluntarily at the first request of the police.

The judge also sees proven that, as a result of this protest, the PP suffered damages valued at 1,391 euros at its headquarters, which it has not waived despite the fact that it withdrew as an accusation of the case, but the sentence does not make them fall in the defendants because they are acquitted.

At the trial, the prosecutor asked the judge to indict former CUP deputy David Fernàndez -he was a witness for the defense- for an alleged crime of false testimony because he declared that he was at the door of the headquarters, very close to the entrance , and that even so he did not see anyone enter the lobby, while the security camera shows that people did enter: in the sentence, the judge refuses to accuse him.

‹ ›
Keywords:
PPCrímenes
Your comment has been forwarded to the administrator for approval.×
Warning! Will constitute a criminal offense, illegal, threatening, offensive, insulting and swearing, derogatory, defamatory, vulgar, pornographic, indecent, personality rights, damaging or similar nature in the nature of all kinds of financial content, legal, criminal and administrative responsibility for the content of the sender member / members are belong.
Related News