The minister insists on condemning Barrionuevo's statements about the GAL: "They are despicable". 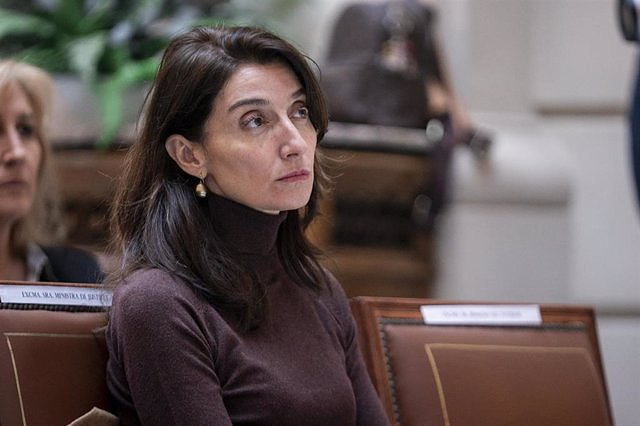 The minister insists on condemning Barrionuevo's statements about the GAL: "They are despicable"

The senator of the PP Cristina Ayala has accused the PSOE this Tuesday of "supplanting the Justice to continue in the Government", warning of a possible pardon to the former Andalusian president José Antonio Griñán for the ERE, the proposal to repeal sedition and the sentence reductions for the 'law of only yes is yes', to which the Minister of Justice, Pilar Llop has responded by branding the 'popular' as "world champions" in discrediting institutions for the non-renewal of the General Council of the Judiciary (CGPJ).

Ayala has started by formulating the planned question -whether the Government plans to pardon those convicted by the Justice even before they go to prison, alluding to Griñán-, but has also put on the table the repeal of sedition, "leaving disarmed the State so that the independentistas advance in their political objectives", and "the aberrant result" of the 'law of only yes is yes', "one of the star laws of the Government".

Llop, who has described as "disloyal" that Ayala included these other issues in his question, has insisted that, as he already responded in another parliamentary session on June 7, "they are reasons of justice, equity, public utility and, Sometimes it is also the best interests of minors that lead this government to grant pardons", without ruling on the pardon petitions made in favor of Griñán.

In addition, he has reproached Ayala for using the pardon policy "to discredit the institutions", although at the same time he has added that the PP are "world champions" in this discipline, emphasizing that the CGPJ has been waiting for almost four years to renew their vowels.

He also wanted to emphasize that the 'popular' are not "angels fallen from heaven", giving as an example the pardon of a kamikaze whose lawyers would have ties to the Government of Mariano Rajoy.

In reply, Ayala has blamed the PSOE for coming to the Government with a motion of no confidence "under the pretext that corruption is going to end" and now there is talk of pardoning "the ringleader of the biggest corruption case in Spain ". "What formula are they going to use to avoid jail", he has raised.

The PP senator has assumed that previous governments "have been able to hit or miss in assessing the pardoned person" but has stressed that "never has a government used the pardon to its benefit", something that she has blamed on the current Executive.

"What you are doing is supplanting the Justice to continue in the Government," he denounced, immediately warning that not only would pardon be sought but also "legal changes to leave unpunished behaviors that deserve jail, to continue for longer in Moncloa".

In this second group, the 'popular' parliamentarian has included the repeal of sedition, rejecting the Government's argument that it is necessary to equate this crime to Europe, to claim that "we need a law that protects us in Spain from what happens in Spain". "And we have coup leaders who carried out a coup and say they will do it again," she warned.

In this regard, Ayala, partly reproducing the 'face to face' between Pedro Sánchez and Alberto Núñez Feijóo, has asserted that "Catalonia is not better than in 2017 because they (the independentistas) are the ones who modulate". "Of course, you are no better than in 2017, look where the management of the Catalonia issue has led you," LLop snapped.

To all this, the PP senator has added that "Spanish women are more insecure against sexual offenders due to a government law", urging the Minister of Justice to speak out, something she has not done.

On the other hand, the senator from Bildu Gorka Elejabarrieta has asked Llop if the Government believes that the statements of former minister José Barrionuevo "in which he justifies and supports the actions of the Anti-Terrorist Liberation Groups (GAL) could lead to legal actions". .

Elejabarrieta has stressed that Barrionuevo has not only admitted in a recent interview the "kidnapping" of Segundo Marey, whom they confused with a member of ETA, but also the "attempted kidnapping" of ETA member Larrechea, "for which he has never been tried ".

Llop has answered that Barrionuevo's statements are "condemnable", "contemptible" and "absolutely inadmissible" because "they hurt the victims, all democrats, Spanish society and, particularly, Basque society".

However, Elejabarrieta has estimated that these are "fectiche words" and has pointed out as a "real challenge" to recognize "that the State used all the coercive and illegal mechanisms at its disposal to defend by force what it calls the sacrosanct unity of Spain ".

She has stressed that "everything that involves departing from the Constitution, the law and the rule of law deserves absolute rejection by this Government", although she has clarified that it does not depend on the "will" or the " action" of the Executive to adopt judicial measures or pronounce on those that can be undertaken.

‹ ›
Keywords:
PSOEEREPPCGPJIndultos
Your comment has been forwarded to the administrator for approval.×
Warning! Will constitute a criminal offense, illegal, threatening, offensive, insulting and swearing, derogatory, defamatory, vulgar, pornographic, indecent, personality rights, damaging or similar nature in the nature of all kinds of financial content, legal, criminal and administrative responsibility for the content of the sender member / members are belong.
Related News