AMP. Judges lower sentences for those convicted of sexual abuse by reviewing three sentences after the 'law of yes is yes'

In one case the reduction has been from five years to a sentence of almost seven years. 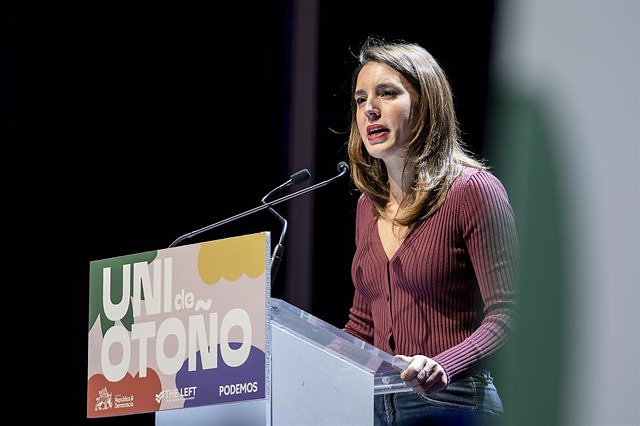 The Spanish courts have already reviewed at least three sentences after the approval of the 'law of only yes is yes' - promoted by the Minister of Equality, Irene Montero - and have reduced the prison sentences of three convicted of sexual abuse to minors considering that the reform of the Criminal Code is "more favorable to the inmate".

This Tuesday, several cases have emerged in which the sentences imposed have been reduced by applying Organic Law 10/2022, of September 6, on the comprehensive guarantee of sexual freedom. The magistrates have applied reductions of up to five years in prison to sentences that were already final.

In all three cases, the courts have explained that they have adopted the decision "on the occasion of the reform operated by Organic Law 10/2022, of September 6, on the comprehensive guarantee of sexual freedom."

In one of the proceedings, to which Europa Press has had access, the magistrates have specified that although the 'law of only yes is yes' does not clarify whether or not it should be applied to procedures in process or with a final sentence, the Code itself Criminal indicates that "those criminal laws that favor the defendant will have retroactive effect."

In one of the cases, Section 15 of the Provincial Court of Madrid has reviewed a sentence issued last May in which a man was sentenced to six years, nine months and three days in prison for three crimes of sexual abuse -- one of them to a minor of 16 years-- and for a crime of possession of pornography.

The man went to court after hearing about the application of the reform, given that some of the behaviors for which he was sentenced are no longer a crime. The magistrates have had to apply the law promoted by the Ministry of Equality.

In the order, dated October 7 and to which Europa Press has had access, the Madrid Court explained that "the current regulation being obviously more favorable, the new 'law of only yes is yes' must be applied." Thus, he has reduced the sentence that was imposed on him at first by five years, so the sentence remains at one year and three months in prison.

Specifically, the judges have annulled the sentence for three crimes of continued sexual abuse as they do not constitute a crime with the new regulation, while maintaining the rest of the penalties for sexual abuse and a crime of possession of pornography.

In another case, the magistrates of Section 17 of the Provincial Court of Madrid have agreed to review the sentence imposed on a man who was convicted by final judgment in May 2021. They have reduced the sentence "from eight to six years in prison" for be "more favorable to the prisoner", as stated in a car, dated November 7 to which Europa Press has had access.

According to the original sentence, to which this agency has also had access, on April 3, 2020 the man --of Honduran nationality-- abused the daughter of his sentimental partner, who was 13 years old at the time. That same day he was arrested by the authorities.

Now, after the 'law of only yes is yes', the Provincial Court of Madrid has explained that what corresponds is to reduce the prison sentence imposed. The magistrates have specified that in this case the circumstances of the case and of the author have been taken into account.

In this sense, they have recalled that in the original sentence "it was considered prudent to impose the minimum sentence imposed at that time." Thus, they have pointed out that now "the review must take place in the same terms"; that is, the prison sentence should be reduced to six years "with all the consequences that were favorable to him."

On the sidelines, the same Section of the Provincial Court of Madrid --number 17-- has agreed to review the sentence imposed in a final judgment on a man convicted of a crime of sexual assault, according to the November 4 order to which he has had access Europa Press. In this case, the magistrates have considered it pertinent to reduce "the sentence imposed from six years in prison to four years in prison" because it is "more favorable to the defendant."

The General Council of the Judiciary (CGPJ) warned in February 2021 in its mandatory report on the preliminary draft of said regulation that its approval would cause the downward revision of those convictions in which maximum penalties had been imposed in accordance with the previous regulation.

The law went ahead last August in the Congress of Deputies with the votes against by PP and Vox and the abstention of CUP.

‹ ›
Keywords:
CrímenesAbusos SexualesIrene Montero
Your comment has been forwarded to the administrator for approval.×
Warning! Will constitute a criminal offense, illegal, threatening, offensive, insulting and swearing, derogatory, defamatory, vulgar, pornographic, indecent, personality rights, damaging or similar nature in the nature of all kinds of financial content, legal, criminal and administrative responsibility for the content of the sender member / members are belong.
Related News