Xavi: "We must be very humble because we haven't won the Champions League since 2015 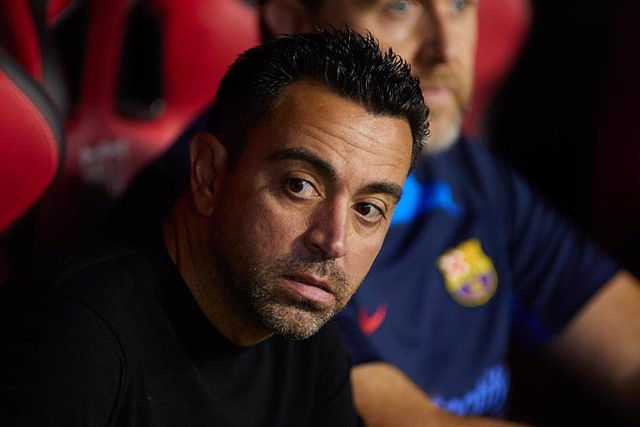 The FC Barcelona coach, Xavi Hernández, recalled that "it is a privilege" to be able to play in the Champions League, a competition in which, although "dreaming is free", the objective they must have is to "compete" and face it with " a lot of humility" because they haven't won it since 2015, so he asked to be "alert" before Viktoria Plzen's visit this Wednesday.

"It's the Champions League, it's a privilege to be able to play it and we start at home against a rival that has nothing to lose and it's a 'cheating' match, we have to be alert because they are a very physical rival, who take advantage of set pieces very well and very fast in transitions", assured Xavi this Tuesday in a press conference prior to the visit of the Czech team.

The culé coach recalled that they have had "a very difficult group", but that they are "with all the enthusiasm in the world", with the clear objective of "competing and trying to win the competition". "The objectives are titles and tomorrow's match is the three points. We don't have to look any further. We have to get through the group and then we'll see. We have to compete and generate good feelings, but dreaming is free, why not we can win," he warned.

"Competing and dreaming of winning it, otherwise I wouldn't be here. I want to win, I can't conceive of competing without winning, but from here to being the favourite... We must have a lot of humility, we haven't won it since 2015 and last year we played in the League Europe, we must be cautious and think that each match is going to be a 'war'", reiterated the Catalan coach.

He insisted that they have "a lot of enthusiasm and desire to compete in the top club competition." "It wasn't hard to be there, you have to appreciate it and work hard to get the three points against Viktoria, but it's the Champions League and it generates a special illusion for us," he declared.

In this sense, it is clear that "they are not" one of the best templates because that "must be proven". "I can go out and say that it is the best in the history of Barça, losing against Viktoria and I eat it with potatoes. You have to prove it like you did against Sevilla, Real or Valladolid, and at the end of the season you ask me if It is the best in the Champions League," he replied.

"Here there is pressure every day, welcome. We have won five European Cups, we are going to try to compete as far as we can", continued Xavi who sees "very good and very positive that illusion is generated among the Catalans" and that he does not want to throw looking back on the latest performances in the Champions League because "each season is a story and each game, a world". "We will try not to repeat it and to compete in every match whether it is Bayern, Inter or Viktoria. It is difficult to win the Champions League because there are great squads," he stressed.

Therefore, he stressed that Viktoria Plzen "is not affordable." "They do things very well and it will complicate us. It is essential to start well and win the three points at home is vital because then come two difficult starts. We have to change the chip and also have good feelings in the Champions League," said the Blaugrana coach.

What is also clear is that "there will be rotations." "The calendar is very demanding and we need people to play, to participate. There is fatigue, discomfort, in Seville it was a very physical game and there is an accumulation of fatigue and it is positive that there are rotations and that people feel important. I have a large squad and my idea is to rotate", he commented.

In any case, Xavi ruled out Héctor Bellerín and Marcos Alonso for this match, who "have to shoot, they haven't had many minutes in the preseason and they need more physical baggage", although he confirmed that they will be there for the weekend, while he insisted in that it has Gerard Piqué and Jordi Alba who "are helping from another role at this time", but that this "may change".

On the other hand, the one from Terrassa recognized that his team has had "a lot of improvement" since his arrival. "In our model we have improved a lot, also the players, and on a mental level the team is better, the new additions have come in handy, they have come with a winning character and the competition between them helps everyone train well", he stressed.

The former player was very satisfied after seeing the victory repeated in Seville, where he believes there was a misleading feeling that there was "tremendous dominance" by the Seville team. "But his chances were all offside," he pointed out. "We have goals and effectiveness, the defensive line is fine, and we are in a good moment of form, but now we have another test. The sensations are very good in general", he confessed.

"I have nurtured a lot from Pep (Guardiola) and Luis Enrique, they are two spectacular references for me and if they are not among the three best in the world, they are among the five. I like to control the game with the ball, but if there is space, we have to take advantage of it, we also made transitions with Pep. Now in modern football the rival squeezes you up, with one for one and the space is already generated and we have to take advantage of it, but of course it is 'Barça DNA', both things they are good", he explained about the styles of his predecessors, more direct that of the Asturian.

In addition, Xavi confirmed that Miralem Pjanic will leave the club because he had "a proposal to play more" and understands that he wants to "be happier having minutes", highlighting that the Bosnian has been "a great professional until today".

Regarding Ansu Fati, he indicated that he has "talked" with the striker and that he is already "prepared" to play as a starter and to "enter more often", while Frank Kessie's lack of minutes "is a matter of adaptation. "Pablo Torres is one more in the squad and I am very happy with him," he added about the young footballer, who will enter the list for his debut in the Champions League.

Finally, the Catalan coach referred to Ousmane Dembélé. "I am part of this change, but I am not the most responsible and I have never seen a change. I have been honest with him, he is a key player and I have insisted a lot so that he can stay. He has the capacity and with the mentality that he has now he is easier for him to succeed, he is the one who has changed the chip," he said.