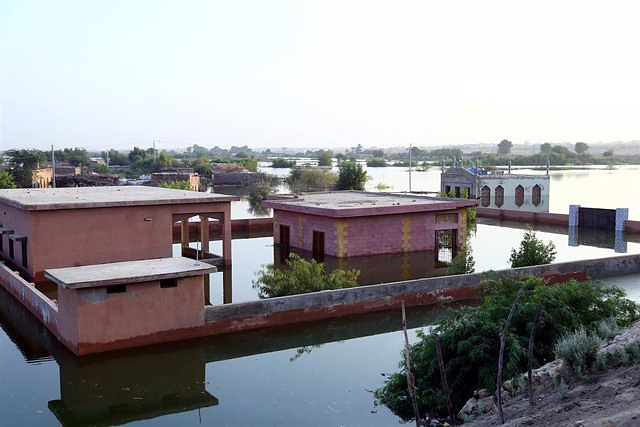 The chief minister of the Pakistani province of Sindh, Murad Ali Shah, has warned that it will take between three and six months to drain all the water from the serious floods that have affected the area in recent weeks and that have cost life to almost 1,400 people throughout the country.

"There are areas with 8 to 10 feet of water," 2.5 to 3 meters, Shah said. "Even where the water level is lowering, people still cannot return," he lamented, according to the Pakistani newspaper 'Dawn'.

In addition, Shah has recalled that this year they have fallen between 10 and 11 times the usual amount of rain. "The whole world has come together to combat climate change," said Shah, who has accompanied the UN Secretary General, António Guterres, on his visit, and to whom he has conveyed the urgent need for tents and medicines.

Meanwhile, the Dadu area in Sindh is now suffering from a rising water level that has left 150 villages submerged and is already threatening Dadu city itself.

Sindh has been the province hardest hit by the monsoon rains, with 578 of the dead and 8,321 of the total 12,728 injured recorded between June 14 and September 9, according to the latest official balance.

‹ ›
Keywords:
Pakistán
Your comment has been forwarded to the administrator for approval.×
Warning! Will constitute a criminal offense, illegal, threatening, offensive, insulting and swearing, derogatory, defamatory, vulgar, pornographic, indecent, personality rights, damaging or similar nature in the nature of all kinds of financial content, legal, criminal and administrative responsibility for the content of the sender member / members are belong.
Related News