Fernando Alonso retires on the day of his historic racing record in Formula 1. 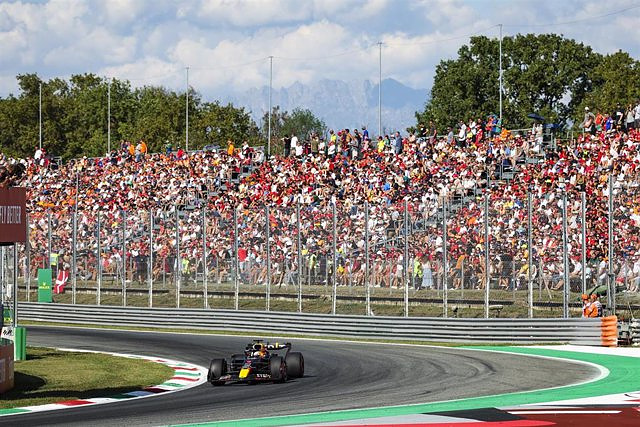 The Dutch driver Max Verstappen (Red Bull) has conquered this Sunday the Italian Grand Prix, sixteenth round of the Formula 1 World Championship, and has taken another step towards the title, while the Spanish Carlos Sainz (Ferrari) has finished fourth starting from the bottom of the grid and Fernando Alonso (Alpine), the day he celebrated 350 races in F1, had to retire due to mechanical problems.

In a decaffeinated finish under the safety car, which appeared on the track a few laps from the end due to an incident involving the car of Australian Daniel Ricciardo (McLaren), the reigning world champion dominated at Ferrari's home despite starting seventh for a five-position penalty. Once again, it was clear that there is no strategy that is worth against Verstappen's infernal pace, and it only remains to know when he will be champion again.

With his fifth consecutive victory, he leads by 116 points with six appointments to go over the second in the championship, the Monegasque Charles Leclerc (Ferrari), who could not defend his position as 'poleman' and could only be second, ahead of the British George Russell (Mercedes), who completed the podium.

Sainz, for his part, signed a great race in which, starting from the bottom of the grid after changing his power unit, he climbed up positions to finish fourth, and even dreamed of 'chasing' Russell before the ' safety car' ruined all plans.

For his part, Alonso, who started sixth due to the penalties for a large part of the grid, suffered from energy problems in the first stage of the event and finally had to retire on lap 32 due to a hydraulic pressure problem in his Alpine. With this, he put an end to his streak of ten consecutive tests managing to finish just on the day that equaled the Finn Kimi Raikkonen as the driver with the highest number of races in the 'Great Circus' (350).

With the grid completely revolutionized, with almost half of the grid penalized for changes in their cars, Leclerc defended his leadership while the British Lando Norris (McLaren), who was stuck, sank to sixth place.

Only five laps took the reigning world champion to climb from seventh to second place, with breakneck speed that began to unsettle the 'Scuderia' garage. Sainz also rose to the 'Top 10' in just a few laps at the Italian racetrack, and by lap 13 he was fourth.

At that same moment, the safety car due to the problems of the German Sebastian Vettel (Aston Martin) served the Monegasque to enter the garages and left Verstappen as the leader for the first time, who did not stop until lap 25 to put on a medium tire.

Leclerc seemed to keep the Dutchman at bay, who, however, began to pick up the pace to close to just five seconds on the thirty-third lap. Just one lap later, the 'Cavallino Rampante' single-seater was wearing soft tires again in an action that would end up costing him the race.

He went out on the track ready to cut time to 'Mad Max', but it was not enough. The 'safety car' caused by Ricciardo, who stopped his car in Lesmos, was presented as the last chance for Leclerc, but the vehicle did not leave the track and the single-seaters were finishing the appointment behind him.