This is the MidCat, the gas pipeline project between Spain and France stalled since 2019 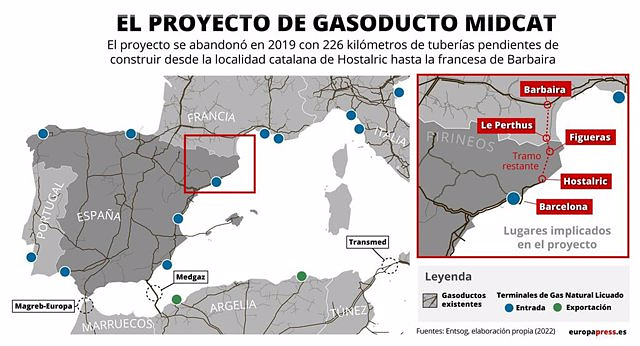 France once again rejected the viability of the MidCat gas pipeline project on Tuesday, after Spain put it back on the table after the interest shown by Germany.

Stalled since 2019, the MidCat project has 226 kilometers of pipes pending construction from the Catalan town of Hostalric to the French town of Barbaira, with a section that would pass through the town of Figueras (Girona) and Le Perthus, on the other side of the border . Spain revived the project again after the German chancellor, Olaf Scholz, announced in early August his intention to promote it.

At Monday's press conference, French President Emmanuel Macron argued that the current gas pipelines (Irun and Larrau-Calahorra) are sufficient for the future and that insisting on MidCat is a "wrong solution."

Hours later, the Energy spokesman for the Community Executive, Tim PcPhie, recalled at a press conference that MidCat became a candidate in 2019 for its list of Projects of Common Interest (PCI), which are those infrastructure considered essential for the block and that can receive community funds. He explained that "both France and Spain at that time opposed its inclusion" because it was not a "mature" project, so it should be parked pending new evaluations.

The latest list of the European Commission, published in 2021, includes three interconnections with France: one through the Bay of Biscay, two through Navarra and Aragon through the Pyrenees and the electrical connection between Galicia and the north of Portugal.

As in the previous update, the third interconnection between Spain and Portugal and the MidCat gas pipeline did not appear, as they were in the previous three. Brussels publishes this list every two years since 2013.

McPhie explained that it is up to Spain and France to continue their examination to decide its viability before reaching a stage in which the Community Executive judges the project. In addition, he recalled that the options to incorporate it will also happen because they are compatible for the transport of hydrogen, since the European Union does not contemplate new investments in gas infrastructures to favor its objective of advancing in renewables while reducing its dependence on Russia.

The Third Vice President and Minister of Ecological Transition, Teresa Ribera, recalled at the press conference after the Council of Ministers on Tuesday that the project does appear in the annex of important infrastructures of the RepowerEu plan, which "adopted the heads of State and Government at the proposal of the European Commission before the summer".

In addition to defending the need to propose this type of infrastructure at an "exceptional" moment, Ribera argued that Spain's approach to the gas pipeline is that it can be used in the future to transport green hydrogen.

‹ ›
Keywords:
AlemaniaFrancia
Your comment has been forwarded to the administrator for approval.×
Warning! Will constitute a criminal offense, illegal, threatening, offensive, insulting and swearing, derogatory, defamatory, vulgar, pornographic, indecent, personality rights, damaging or similar nature in the nature of all kinds of financial content, legal, criminal and administrative responsibility for the content of the sender member / members are belong.
Related News