The protests of recent years bring change closer to Colombia

The mobilizations of 2019 and 2021 defeated the Colombian 'establishment' and laid the foundations for the budding political turn. 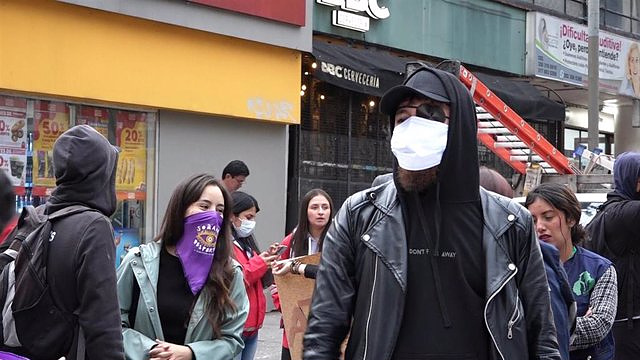 The current Colombian electoral process is deeply influenced by the great anti-government protests of 2019 and 2021, which left dozens dead, generated social transformations and also a greater interest in politics from sectors hitherto located on the margins of public life.

"We young people play a very important role. Many of us are fed up with the system. Everything has failed," says Gareth Sella, a 26-year-old who lost his sight in one eye last year, due to the effect of a rubber ball fired by the Mobile Anti-riot Squad (Esmad) of the Colombian National Police, during a march called to protest against police violence. At least 105 people had one of his eyes amputated due to projectile effects in 2021.

"That day they killed me, somehow," recalls the student. "What I had been for 24 years had ended, and another totally different life was beginning, one of struggle, more radical, more combative," he adds, while recently walking in another demonstration against the actions of the authorities.

Those who took to the streets last year demonstrated, initially, against a tax reform proposed by the president, Iván Duque, but soon added other demands, such as the establishment of a basic income for the poorest, the end of the murders of social leaders, better education and concise measures to attack unemployment, inequality and poverty.

Duque withdrew the tax reform and the finance minister resigned -- although he was soon appointed a high-ranking official at the Central Bank -- but he was unable to stop the demonstrations.

His government has been severely affected by the protests. The 'establishment' that supports the right-wing leader, made up of the two traditional parties, the Liberal and the Conservative, as well as the Democratic Center of his political godfather, former president Álvaro Uribe (2002-2010), was clearly defeated in the first electoral return held on May 29.

Fico Gutiérrez, the candidate of the formations that have governed Colombia since the 19th century, was third and therefore out of the ballot on June 19, in which leftist Gustavo Petro, a former M-19 guerrilla and former mayor of Bogotá, and the populist Rodolfo Hernández, a millionaire builder considered the Colombian Donald Trump. They are two very different politicians but they do not belong to the families and acronyms that have historically held the reins of the coffee country.

The low popularity of Duque, who will leave the Government in August with less than 30 percent approval, has contributed decisively to this defeat of the 'establishment'.

"Colombian society must have changed. We saw people die live, on Instagram, on television and other networks," says the student Sella.

According to a survey by the National Consulting Center, 70 percent of young people between the ages of 18 and 25 were initially in favor of the protests. Another firm, Invamer, registered, before the first round, that 53 percent of the voters in that age range were going to vote for the progressive Petro, who goes to the ballot in a technical tie with Hernández, according to the latest polls. .

"The fundamental symbol of the change and resistance that has occurred in Colombia is the awakening of consciences," exposes, patch on the face, another protester who lost an eye during the 2019 protests due to the effect of a stun bomb.

"The country has always had a large percentage of the population that considers itself apolitical. With the social explosion and the transformations that have been seen, which have affected them directly or indirectly, they have led to a change of consciousness. Those people who eight or ten years ago They didn't vote for years, now they take to the streets, demanding guarantees and rights.

60 percent of Colombians want change, according to polls, and the candidates, who got 68 percent of the votes together (40 percent Petro and 28 percent Hernandez), are aware of this. Petro managed to bring together most of the protest vote of the protesters, but Hernández has also achieved great support by criticizing "politicking" and traditional formations.

Part of the builder's chances in the elections is to maintain his independent image, something that has been complicated after receiving the support --unclaimed-- of the 'establishment' candidate, Gutiérrez, and the most extreme right-wing sector of Uribismo .

Petro has also allied itself with traditional regional bosses --some supporters have been harshly criticized by the bases--, but it did so in the first round and the benefit or detriment of these alliances has already been amortized.

Young Colombians yearn for change, and ask for it in the streets, but they are not strongly represented in either the Petro or Hernandez ranks. There is a clear lack of youth access to Colombian politics, contrary to what happens in other countries, such as Chile, where the new government is made up of thirtysomethings and has many twentysomethings in the front line.

In Colombia, Petro is 62 years old and Hernández is 77. His closest advisers are also veterans, except, perhaps, the progressive candidate for vice president, Francia Márquez, who is 40 years old.

"Young people are economically affected by the general situation in the country. We lack the tools, free, public, quality education that can guarantee that we get the tools to generate solid political discourse," protester Sella lamented in a country where This Sunday, more people under 30 years of age have the right to vote than ever before.