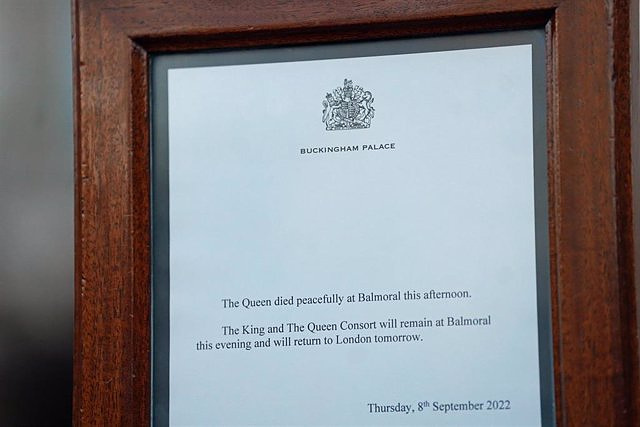 The Government together with the Royal House will decide "the best representation" of Spain for the funeral of Queen Elizabeth II, who died this Thursday at the age of 96, according to the Minister of Foreign Affairs, European Union and Cooperation, José Manuel Albares.

In an interview on RNE, collected by Europa Press, Albares stressed that the details of what the funeral will be like are not yet known, so "it is not convenient to speculate."

Thus, he recalled that according to the protocol in the United Kingdom, the funeral is expected to take place in about ten days, but it remains to be seen how it will be, if "private funerals" or national funerals are chosen and then it is extended. to foreign leaders.

For this reason, he has defended that we must wait for the invitation to arrive and then it will be "the Government with the Royal House who will decide the best representation" by Spain.

Expressly asked if the King Emeritus could attend the funeral, Albares stressed that currently the head of state is Felipe VI and that, like his father, "he also represents the family ties" between the two royal houses.

Shortly after the death of Isabel II was known, Felipe VI sent a telegram to the new King Carlos III to convey his condolences. Likewise, in an act in Seville, he praised the figure of the monarch, whom he defined as "one of the best queens of all time for her dignity, sense of duty, courage and dedication to her people".

Don Felipe maintained a close relationship with Elizabeth II, whom he affectionately called "Aunt Lilibet", as do the rest of the members of the British royal family and as was made clear in the message of condolences that he and Queen Letizia sent to the sovereign after the death of her husband, the Duke of Edinburgh, in 2021.

Both royal houses are linked by blood ties. The parents of Felipe VI, Don Juan Carlos and Doña Sofía, are great-great-grandchildren of Queen Victoria of England, as is Elizabeth II and her husband was.

In the case of Prince Felipe, his ties with Don Juan Carlos and Doña Sofía were even closer, especially with the latter, of whom he was the second uncle since King George I of Greece was his grandfather and the queen's great-grandfather. emerita

As regards Juan Carlos I, his grandmother, Queen Victoria Eugenia, was a first cousin of the mother of the Duke of Edinburgh, Alicia of Battenberg.

‹ ›
Keywords:
Casa RealUE
Your comment has been forwarded to the administrator for approval.×
Warning! Will constitute a criminal offense, illegal, threatening, offensive, insulting and swearing, derogatory, defamatory, vulgar, pornographic, indecent, personality rights, damaging or similar nature in the nature of all kinds of financial content, legal, criminal and administrative responsibility for the content of the sender member / members are belong.
Related News