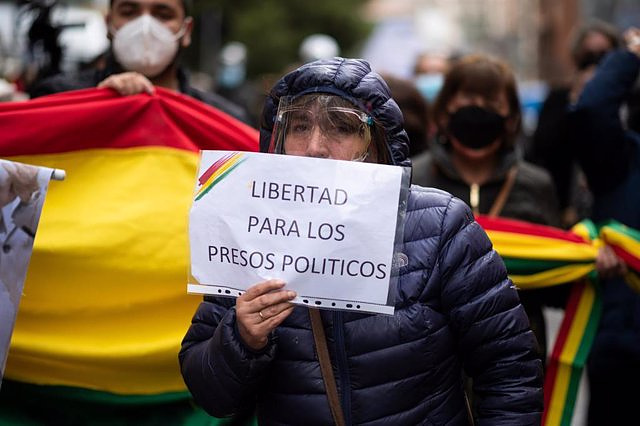 The Bolivian opposition has announced mobilizations this Saturday to protest against the 10-year prison sentence of former president Jeanine Áñez for the 'Coup d'etat II' case, issued by a court in La Paz this Friday.

Specifically, the platform National Committee for the Defense of Democracy (Conade) - promoter of the November 2019 protests that culminated in the resignation of former President Evo Morales and, later, the rise to the Presidency of Áñez - has called citizens to mobilize "starting next week", reported 'Página Siete'.

Likewise, the leader of Conade, Manuel Morales, has invited opposition leaders and other platforms to join the call, emulating what happened in 2019.

"I call on Fernando Camacho to come out and lead the mobilizations in Santa Cruz and I call on all the people who came out in 2019 to do so too, because we cannot remain silent and let the Movement Towards Socialism (MAS) throw a party on a flagrant violation of Human Rights," Morales said in a statement collected by 'La Patria'.

Likewise, from Conade they consider that "this is the moment in which the people have to go out and express that they do not agree with the sentence." They have also shown her solidarity with the former president, since "on her back they want to make her carry the entire mobilization of 2019."

Áñez --in preventive detention since March 2021-- is accused in the context of what happened in November 2019, when the then president, Evo Morales, left office. Two days later, Áñez herself, then a senator, assumed the Presidency of Bolivia.

As expected, the sentence against Áñez has reopened the enormous political fracture that still exists in the country.