Some 6,000 police officers and civil guards from all over Spain cry out in Madrid against "discrimination" by the Government 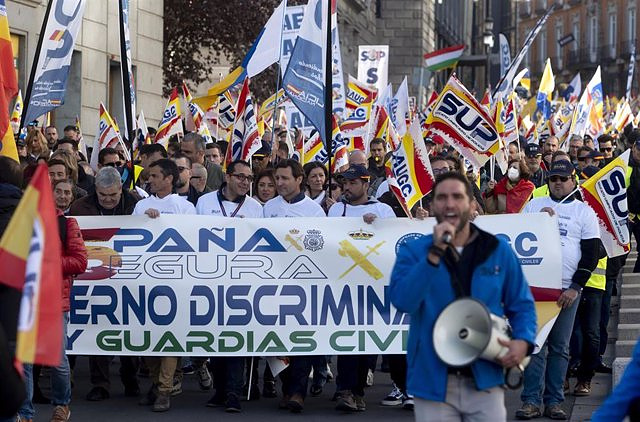 Around 6,000 people, according to the Government Delegation, have cried out this Saturday in a demonstration in Madrid against "discrimination" by the Government against police officers and civil guards, for whom they have demanded job improvements.

The mobilization called by the Unified Association of Civil Guards (AUGC) and the Unified Police Union (SUP), which started at 12:00 in Puerta del Sol to conclude a couple of hours later in the Congress of Deputies, has been encouraged in recent days by the transfer of Traffic in Navarra and by the initiative to eliminate the crime of sedition.

"This government discriminates against the police and civil guards", it has been possible to read this on the poster at the head of the march, in which the participants have carried flags of the unions, of Spain and of the autonomous communities from which they have been transferred for the appointment.

"Marlaska, listen, this is our fight" or "Marlaska, resign", they have also shouted, addressing the Minister of the Interior, Fernando Grande-Marlaska, who is disgraced by the Executive's refusal to sit down to negotiate a 35-hour work week , early retirement like other regional and local bodies or reclassification to category B of the basic scales.

The general secretary of SUP, Mónica Gracia, has called the head of the Interior a "stone wall" and has asserted that the demonstration is a "wake-up call" to the Executive for "turning its back on thousands of officials who watch over freedom and safety of all Spaniards".

"The Government only approaches us when it is interested in saying 'this is my Police', but then they leave us unprotected and eliminate the crime of sedition and embezzlement. That is this Government, the one that deprives us, inhibits us," he criticized. at the end of the mobilization in front of Congress.

In the mobilization, the reduction of the retirement age "as well as the rest of the regional and local police forces" has also been demanded.

Likewise, it has been requested that the working day of 35 hours a week be applied, with configured and stable work shifts, and that the personnel of the Corporals and Guards Scale of Subgroup C1 to B be reclassified, as well as of the Basic Scale of the National Police.

Also, it has been requested that the third and eighth clause of the Salary Equalization Agreement signed in 2018 be complied with. In recent days the Ministry of the Interior has valued this same agreement and the increase in public salaries to remember that police officers and guards Civilians have increased their payrolls by an average of 38% since 2018.

‹ ›
Keywords:
Guardia CivilPolicía
Your comment has been forwarded to the administrator for approval.×
Warning! Will constitute a criminal offense, illegal, threatening, offensive, insulting and swearing, derogatory, defamatory, vulgar, pornographic, indecent, personality rights, damaging or similar nature in the nature of all kinds of financial content, legal, criminal and administrative responsibility for the content of the sender member / members are belong.
Related News