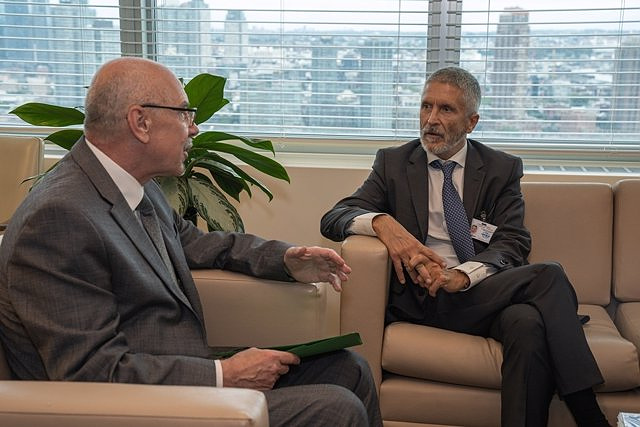 The Minister of the Interior, Fernando Grande-Marlaska, held a bilateral meeting on Wednesday with the Deputy Secretary General of the United Nations for the Office for the Fight against Terrorism, Vladimir Voronkov, in which he conveyed Spain's "firm and unquestionable" commitment to the fight against terrorism.

"We were the first non-permanent member of the Security Council to chair the Counter-Terrorism Committee and we have facilitated in 2021 the seventh review of the Global Counter-Terrorism Strategy," he told Voronkov, while highlighting the participation and trajectory Spanish in the different international forums and groups dedicated to the fight against terrorism.

The bilateral meeting took place within the framework of the United Nations World Congress on Victims of Terrorism, which is being held starting this Thursday at the headquarters of this organization in New York (United States) and which brings together government representatives, victims of terrorism from around the world, as well as academics and experts in the field.

Grande-Marlaska, who is participating this Thursday in the inauguration of this Congress at the United Nations General Assembly, stressed to Voronkov that this Global Congress represents "the culmination of sustained work over time, in which Spain has had a determining role".

The meeting with Voronkov also served to reiterate the support of the Spanish Government for the activities of the United Nations Office for the Fight against Terrorism. "The first phase of growth and consolidation of the Office must now be followed by a second phase of deepening," Grande-Marlaska transmitted.

Grande-Marlaska was accompanied at the meeting by the Spanish ambassador to the United Nations, Agustín Santos; the General Director of Support for Victims of Terrorism of the Ministry of the Interior, Montserrat Torija; and the director of the Intelligence Center against Terrorism and Organized Crime, Manuel Navarrete.

This is the second time that Grande-Marlaska and Voronkov have met this year, after the meeting they held last May in Malaga, after the High-Level International Conference on Human Rights, Civil Society and the Fight against Terrorism. , organized by the UN and the Government of Spain and which was held at the Palacio de Ferias y Congresos in the capital of Malaga.

Grande-Marlaska took advantage of that meeting precisely to convey to the United Nations president Spain's support for the Global Congress of Victims of Terrorism that is taking place these days in New York.

On that occasion, the Minister of the Interior and the Deputy Secretary General of the UN also discussed the process of opening a regional headquarters of the UNOCT in Madrid, which will come into operation in 2022.

At Wednesday's meeting, Grande-Marlaska and Voronkov discussed this issue again and both wanted the Madrid headquarters to start operating as soon as possible to "start working on new projects of common interest to all".

After the meeting, Voronkov, Grande-Marlaska and the former Minister of the Interior and current Deputy Prime Minister and National Security Advisor of the Government of Iraq toured the 'Memoirs' exhibition. During the tour of the exhibition, the three leaders were accompanied by victims who collaborate with the United Nations in this project and for which different personal objects have been donated that symbolize the drama that a terrorist attack entailed in their personal lives.

The minister's activity this Wednesday in New York was complemented by a visit to the 9/11 Memorial and its Commemorative Museum, in which a tribute was paid to the victims on the twenty-first anniversary of this attack.

The Minister of the Interior closed the day with his attendance at the screening of the film 'Maixabel' at the Lincoln Center in New York, accompanied by the director of this centre, Lesli Klainberg, and the director of the Reina Sofía Institute, Begoña Santos.

Before the screening, Maixabel Lasa, widow of socialist leader Juan María Jaúregui and on whom the film is based, and Amy O'Neill, victim of the 2013 Boston Marathon bombing, took part.

‹ ›
Keywords:
TerrorismoOnuMarlaska
Your comment has been forwarded to the administrator for approval.×
Warning! Will constitute a criminal offense, illegal, threatening, offensive, insulting and swearing, derogatory, defamatory, vulgar, pornographic, indecent, personality rights, damaging or similar nature in the nature of all kinds of financial content, legal, criminal and administrative responsibility for the content of the sender member / members are belong.
Related News