"Organizing referendums in regions that have suffered wars, bombings or have had to flee is the signature of cynicism," he said. 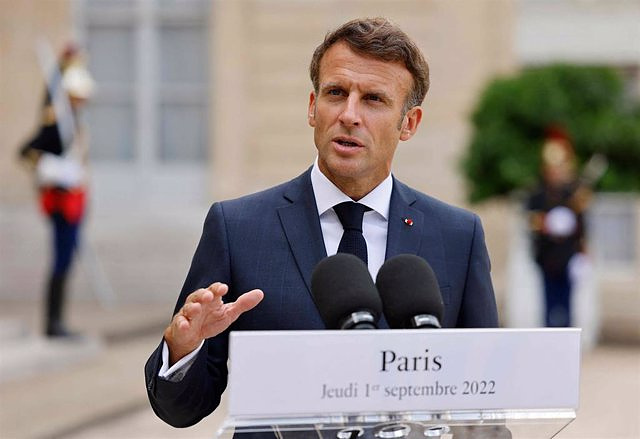 "Organizing referendums in regions that have suffered wars, bombings or have had to flee is the signature of cynicism," he said.

French President Emmanuel Macron said Tuesday during a session of the United Nations General Assembly that France will finance the shipment of wheat from Ukraine to Somalia in the framework of the world food crisis.

Macron has stressed that this decision has been made based on the principles of "solidarity, efficiency and the demand for full transparency" with the main international organizations to help Africa overcome this period of crisis.

"The food crisis is hitting the most vulnerable everywhere and with more force. 345 million people are in a situation of acute famine, including 153 million children", he pointed out, adding that "a true pact" of solidarity with the countries of the South.

The President of France has explained, on the other hand, that his numerous telephone calls to the President of Russia, Vladimir Putin, respond to the search for peace, as well as the desire to reduce the intensity of the war. "(Moscow) has violated the Charter of the United Nations," he said.

"Today we have to make a simple choice: that of war or peace (...) Russia has decided, in doing so, to pave the way for other wars of annexation, today in Europe, but perhaps tomorrow in Asia, Africa or America Latin," he recalled.

For this reason, he explained that the situation will only be resolved through "dialogue", but also through "economic and military" support in Ukraine. Macron has thus called for "not giving in" to "the division of the world", while he has stressed that there is "a return to the era of imperialism and colonies".

Shortly before his speech, the French president described the referendums announced in Ukraine by Russia as a "parody". "The very idea of ​​organizing referendums in regions that have suffered wars, bombings or have had to flee is the signature of cynicism," he stressed, according to the newspaper 'Le Figaro'.

In this sense, the French president explained that this announcement by Moscow is "a farce", since "the only thing" that currently exists in the "war decided" by Russia, as well as Ukraine's resistance to Russian attacks .

The authorities of the self-proclaimed republics of Donetsk and Lugansk, as well as the pro-Russian authorities of Jerson and Zaporiyia, announced on Tuesday that the referendum on the accession of these territories to Russia will be held this same week between 23 and 27 September.

In this way, France joins the criticism launched by the United States, Ukraine itself or Germany, who have condemned the consultations calling them "unacceptable". The Atlantic Alliance has also criticized this vote as "an escalation in Putin's war."

‹ ›
Keywords:
FranciaOnuSomaliaUcrania
Your comment has been forwarded to the administrator for approval.×
Warning! Will constitute a criminal offense, illegal, threatening, offensive, insulting and swearing, derogatory, defamatory, vulgar, pornographic, indecent, personality rights, damaging or similar nature in the nature of all kinds of financial content, legal, criminal and administrative responsibility for the content of the sender member / members are belong.
Related News