IU's bet for the May elections: reinforce public services and end tax benefits for high incomes 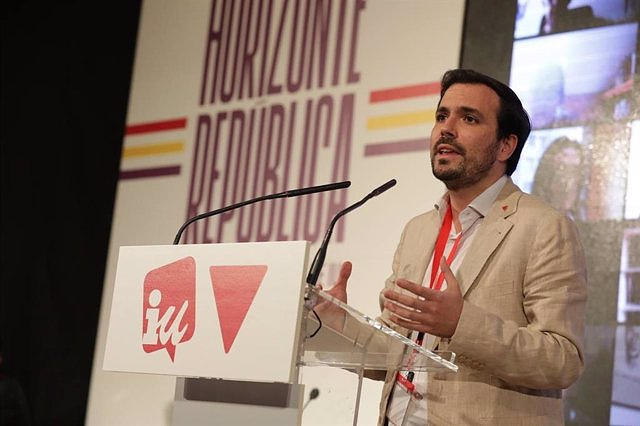 IU bets among its programmatic axes for the May elections for a new regional financing system and delves into a "progressive" tax reform, both at the municipal and regional level, to "guarantee" and "strengthen" the public services with the highest tax burden to great fortunes, to put an end to the "tax desertion of the rich".

And for this, he defends deploying a true tax on wealth by reformulating the Heritage tax, tax exemptions for clean vehicles, a surcharge on the IBI for owners of empty homes or creating a tax on large stores and commercial chains for protection policies for small businesses.

This is how the draft of the framework program, to which Europa Press has had access, for this electoral event is contemplated and which will be addressed by the Federal Coordinator of UI, its highest governing body, before giving it the final form.

The main guidelines of their proposals will be presented publicly at the meeting with mayors and councilors of the organization in the town of Rivas, supported by the federal coordinator and Minister of Consumption, Alberto Garzón. With this event, IU intends to visualize its strong territorial implantation in the face of these elections, by highlighting the 2,000 councilors that it holds and the 200 consistories that it directs throughout the country.

An appointment that serves to mobilize the organization for the new electoral cycle by entrusting its federations and its local structure, to design electoral programs that excite the working class and are open to the participation of social groups.

Thus and through its central programmatic lines, IU is committed to advancing in a new administrative decentralization of the country, promoting the welfare state, promoting the energy transition, staying at the forefront of feminism, sponsoring a new model of commercialization of food products with criteria environmental sustainability and, above all, emphasizes the redesign of the tax system.

In this way, it proposes to include a progressive scale in the IBI, along with a surcharge on this tax on empty homes in order to encourage the rental market, in line with what is proposed in the state housing law project.

In addition, in this tax he defends "review and eliminate" both exemptions and bonuses that certain owners currently enjoy, especially in the case of Church properties not related to cult activities.

A similar approach unfolds for the Mechanical Traction Vehicles tax, which they want to make more progressive and remove tax benefits from high-end cars. In this tax figure, it seeks to introduce environmental criteria with exemptions for less polluting cars. It also claims to abolish the rebates in the Tax on Economic Activities (IAE) for companies with a turnover of more than one million euros.

And in regional matters, one of the programmatic axes is to promote a new financing system, with distribution of resources that has as a criterion the desirable "quality" of public resources and ends with "fiscal competition" between regions. And it is that it concludes that the 1997 model, which allows the CCAA to modulate the fiscal pressure of ceded taxes, is "perverse" in terms of equity and has benefited the highest incomes and the "fiscal dumping" of Madrid.

In this way, he calls for the remodeling of a system that underfinances many communities and leaves differences of up to 35 points in the distribution of income. Therefore, it proposes mechanisms to ensure the financial coverage of all public services, which gives priority to people and not to territories with a tax model that captures more revenue.

In this case, the IU criterion involves eliminating the regional regulatory capacity on the personal and family minimums in personal income tax, preventing deductions for educational expenses that "only affect" users of private education and prohibiting the tax from being subsidized. Inheritances and Donations from one million euros.

In turn, the formation undertakes to reconfigure the Wealth tax to turn it into a true tax on "great fortunes", which, in line with the new state tax, sets a minimum exemption of up to one million euros, with an identical rate for all of Spain and without giving the autonomies the capacity to subsidize the tax from this figure.

Again at the municipal level, it demands the repeal of the local rationalization and sustainability law, and to promote a new law on local competences and financing to promote the autonomy of local entities, clearly define the services assumed by the municipalities and guarantee resources enough money to deploy them.

The draft of the framework program for the May elections also demands the suppression of the budgetary stability law, which restricts the growth of spending and forces the use of surpluses only to repay debt.

In turn, it advocates raising the level of participation in state taxes to reach 2.5% of GDP in the next legislature, which is equivalent to 8,000 million more per year of income for local entities. The same additional amount is contemplated in the UI program by raising the local share of regional income above 1% of GDP.

The outline of the IU framework program emphasizes the promotion of citizen participation policies at the local level, one of the flags of the so-called 'change councils' that the left governed after the 2015 elections.

To this end, it undertakes to approve a letter of citizen participation rights, to give residents a greater role in the processing of the measures developed by the consistories, and to guarantee that the participatory budgets (initiatives proposed by the residents themselves) reach a 5% of annual public accounts.

The promotion of municipal debt audit processes and a "strict" regulation of the regime of incompatibilities of public offices (preventing contracting with companies whose managers worked in the administration for the last three years) are other of the central proposals of IU.

‹ ›
Keywords:
IUFinanciación Autonómica
Your comment has been forwarded to the administrator for approval.×
Warning! Will constitute a criminal offense, illegal, threatening, offensive, insulting and swearing, derogatory, defamatory, vulgar, pornographic, indecent, personality rights, damaging or similar nature in the nature of all kinds of financial content, legal, criminal and administrative responsibility for the content of the sender member / members are belong.
Related News