From the Presidency of the Senate they admit that they will look at how Congress orders Sánchez's appearance scheduled for the 13th. 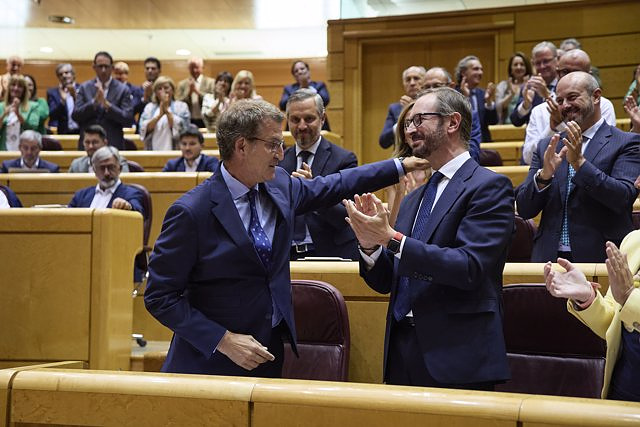 The national leadership of the PP hopes that the Government and the PSOE will reconsider the times of the 'face to face' that will be held in the Senate on October 18 by the chief executive, Pedro Sánchez, and the president of the 'popular' party, Alberto Núñez Feijóo, to avoid the "disproportion" that, in his opinion, was evidenced in the debate that both held last September.

The PP will not attend the meeting of the Board of Spokespersons of the Senate -the body that orders the debates and marks the times- with a demand to give Feijóo more time, but party sources have told Europa Press that it does not seem It is logical that the Prime Minister has "unlimited time" while the head of the opposition must stick to 15 minutes in his initial turn and five in the reply, as happened last month.

Thus, from the PP they have recalled that in the debate on energy on September 6, Sánchez exceeded two hours of time while Feijóo intervened just over 25 minutes. They have also complained about the lack of flexibility that was displayed then because the president of the Senate, Ander Gil, urged him on a couple of occasions to finish his shift, assuring that he had consumed his time.

From 'Genoa' they believe that the Prime Minister's team will now change that format because it was a "disproportionate" difference. Of course, they admit that this also means recognizing that they were "wrong" then, when Pedro Sánchez needed more than 130 minutes to explain his proposals.

Other PP sources stress that Feijóo won that September debate despite the "disproportion". "I also believe that we won the last one thanks to disproportion," a "popular" senator has privately confessed.

From Moncloa they have admitted that they have no problem with the PP leader having more time. "The more Feijóo talks, the better because the more he talks, the more he messes up," government sources have indicated. MEETING ON TUESDAY OF THE BOARD OF SPOKESPERSONS

Of course, sources from the Presidency of the Senate have admitted that they will look at how Congress orders Sánchez's appearance in that Chamber, which is scheduled a few days before, on September 13, since both debates will be similar.

‹ ›
Keywords:
SenadoFeijóoPedro SánchezPSOEPP
Your comment has been forwarded to the administrator for approval.×
Warning! Will constitute a criminal offense, illegal, threatening, offensive, insulting and swearing, derogatory, defamatory, vulgar, pornographic, indecent, personality rights, damaging or similar nature in the nature of all kinds of financial content, legal, criminal and administrative responsibility for the content of the sender member / members are belong.
Related News